Eighty years on, Russia at odds with neighbours on carve-up of Europe 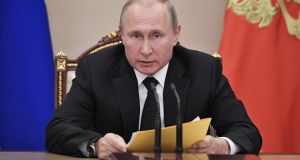 Russian president Vladimir Putin: has encouraged a return to the cold war-era view of the Molotov-Ribbentrop pact as a response to the appeasement of Hitler by Britain, France and other European states. Photograph: Alexey Nikolsky/Sputnik

Five states that were victims of an infamous Nazi-Soviet pact have urged Europe to fight disinformation and attempts to rewrite history, 80 years after the signing of a deal that Russia defends as vital to the ultimate defeat of Hitler’s Germany.

Moscow denied the very existence of the protocol until 1989, when it was denounced under the last Soviet leader, Mikhail Gorbachev.

As East/West relations have soured again in recent years, however, Russian president Vladimir Putin has encouraged a return to the cold war-era view of the pact as a response to the appeasement of Hitler by Britain, France and other European states, and a manoeuvre that bought time for the Soviet Union to prepare for and ultimately crush a Nazi invasion which began in June 1941.

“The basis for sustainable conciliation and building a common future is justice and objective truth,” the foreign ministers of Poland, Romania, Lithuania, Latvia and Estonia declared in a joint statement on Friday, which has been designated the European day of remembrance for victims of totalitarian regimes.

“Unfortunately, the practice of investigating and prosecuting the crimes of totalitarian regimes has been insufficient and inconsistent across countries,” they said.

“We call upon the governments of all European countries to provide both moral and material support to the ongoing historical investigation of the totalitarian regimes. By acting in a concerted manner, we can counter more effectively disinformation campaigns and attempts to manipulate historical facts.”

In Russia, however, senior officials, historians and state media have used the 80th anniversary of the Molotov-Ribbentrop pact to defend its secret protocol and denounce the West for sullying the memory of the heroic Soviet war effort.

“As clouds gathered over Europe, in western capitals – in the hope of hoping ensuring their own safety at others’ expense – they made a selfish and also extremely short-sighted choice in favour of appeasing Hitler’s regime . . . In these circumstances, the USSR had to safeguard its national security alone,” Russian foreign minister Sergei Lavrov said this week.

He accused critics of the 1939 pact of wanting to “downplay or completely silence the role of the Soviet Union in defeating Nazism; they are trying to whitewash the villains, trying to question the outcome of the war.

“The purpose of such speculation is obvious: not only to denigrate modern Russia as a successor to the Soviet Union, but also hide the ugly role of their own states in conniving with Hitler’s regime.”

The concept of spheres of influence was reinforced in the post-war settlement, which led to Europe being divided until 1989, when communist regimes in central Europe collapsed and the co-called Iron Curtain fell. It has returned to prominence since Russia sent troops into Georgia in 2008 and Ukraine in 2014, following its annexation of Crimea that same year.

Estonia, Latvia and Lithuania finally regained their sovereignty with the demise of the Soviet Union in 1991, but on Friday they marked 30 years since up to two million people linked hands across the three states in a pro-independence demonstration that was dubbed the “Baltic Way”.

“On August 23rd, 1989, Estonians, Latvians and Lithuanians stood side-by-side for all of our freedom so we could live in independent, just and democratic countries,” Estonian prime minister Juri Ratas said before celebrating the anniversary of the “freedom chain” with his Latvian and Lithuanian counterparts in Riga. “This is where we began our journey towards being free and developed countries and began building everything that, today, we can take comfort in and be proud of.”