New York attorney general Letitia James has announced a lawsuit against the NRA, alleging senior leaders of the group diverted millions of dollars for personal use and to buy the silence and loyalty of former employees. Video: Reuters 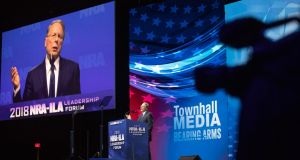 The New York attorney general has sued to dissolve the National Rifle Association, accusing its powerful leader, Wayne LaPierre, and a coterie of top executives of siphoning off millions of dollars from America’s formidable pro-gun lobbying group for their own benefit.

Letitia James, the US state’s attorney general, called the NRA “a breeding ground for greed, abuse and blatant illegality” and said it had “gone unchecked for decades while top executives funnelled millions [of dollars] into their own pockets”.

Ms James is seeking to dissolve the NRA, which was founded in New York in 1871 as a charitable organisation, as well as to remove Mr LaPierre and other top executives and require them to pay restitution.

In a press conference on Thursday, she framed the lawsuit as a classic case of a charity that had violated the law.

Yet it comes just three months before a presidential election and is fraught with political undertones: Ms James is a progressive attorney general who campaigned, in part, on a promise to investigate President Donald Trump and his business empire.

The NRA, in addition to being a gun rights lobby, is also part of the backbone of the modern conservative movement. It has used a vast war chest over the years to support favoured political candidates, including Mr Trump, who benefited from millions of dollars of NRA spending in the 2016 campaign on television advertising and get-out-the-vote operations. It has endorsed him again ahead of the November election.

Even before Thursday’s action, however, the NRA had been beset by financial problems and infighting. Its spending in the 2018 midterm elections was down as major donors pulled back after accusing Mr LaPierre of mismanagement.

Ms James denied that politics played any role in her decision, saying that her investigators had merely followed the facts.

Carolyn Meadows, the NRA’s president, called the suit “a baseless, premeditated attack” on her organisation and the second amendment right to bear arms.

“You could have set your watch by it: the investigation was going to reach its crescendo as we move into the 2020 election cycle,” Ms Meadows said.

Mr Trump told reporters the lawsuit was “a terrible thing” and suggested the NRA “move to Texas and lead a ... beautiful life” there.

In the civil lawsuit, the New York attorney general laid out allegations of a web of self-dealing between top NRA executives, board members and favoured vendors that allowed them to enrich themselves while silencing dissenters.

Among other misdeeds, Ms James accused Mr LaPierre, who has been the NRA’s executive director for almost 30 years, of using the group’s funds to charter private planes for family vacations to the Bahamas at least eight times in the past three years. Mr LaPierre and his wife also went on safari in Africa at the NRA’s expense, according to the complaint.

Ms James said her investigation was ongoing and that she would refer any potential criminal misconduct to the Manhattan district attorney.

The Washington, DC attorney general filed a parallel suit on Thursday that accused the NRA of milking its charitable foundation for cash.

When that loan was paid back in March 2018, the association requested another $5 million loan. That second loan was extended twice and subordinated to other NRA debt, the lawsuit alleged.

While the legal action is likely to deepen the NRA’s troubles, some worried that it might have unintended political consequences, coming just ahead of the election.

“I don’t understand the timing of this, and I think a lot of people look at this and worry it will motivate Republican base voters in swing states,” one Democratic consultant said.

A tweet from Mr Trump shortly after the cases were announced underscored the political stakes: “Just like Radical Left New York is trying to destroy the NRA, if [Joe] Biden becomes President your GREAT SECOND AMENDMENT doesn’t have a chance. Your guns will be taken away, immediately and without notice. No police, no guns!” – Copyright The Financial Times Limited 2020