Dutch do not have to repatriate families of jihadis, court rules 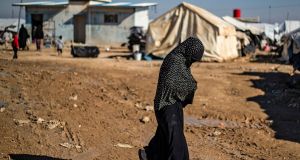 The Kurdish-run al-Hol camp for the displaced in the al-Hasakeh governorate in northeastern Syria: Lawyers for “jihadi wives” and their children have lost the case to have them repatriated to the Netherlands. Photograph: Delil Souleiman

The Dutch supreme court has dashed the repatriation hopes of so-called jihadi wives and their children by ruling that the government has no obligation to bring them home from Syria – and that the decision is a political one rather than a human rights issue.

The ruling was greeted with dismay on Monday by lawyers for the 23 women who took their case to the courts at the end of last year. They said the real and lasting damage would be done not primarily to the mothers but to their 56 “pitiful” children , most of whom are under six.

Prime minister Mark Rutte will be hoping the court’s judgment will bring an end to a controversy that has divided his four-party coalition government and public opinion, and that – until the start of the coronavirus pandemic – even threatened to become a general election issue next March.

Mr Rutte’s Liberal Party and their largest coalition partners, the Christian Democrats, have been opposed to repatriation because of the alleged national security threat involved – while the two junior parties, D66 and Christian Union, have been in favour on humanitarian grounds.

When the case first went to court last November, the government lost the legal argument and was ordered to do “everything possible” to bring children under 12 home – something the Kurds, who were holding them, said would not happen unless their mothers went with them.

However, that first decision was overturned by a court of appeal towards the end of 2019, at around the time Ireland repatriated former soldier Lisa Smith and her two-year-old daughter.

That appeal court decision has now been confirmed by the supreme court in The Hague, leaving the women with little further room for manoeuvre apart from taking their case to the European Court of Human Rights in Strasbourg, where a similar case from France is already under consideration.

All the main arguments in the Netherlands have been rejected by the supreme court, which says that not alone is the decision fundamentally a political issue of foreign policy – but that in any case Dutch human rights treaties do not apply because the women are outside the jurisdiction, in Syria.

It said a key point was that the women had travelled to Syria of their own volition and so, in addition to the potential national security threat if they were repatriated, it also had to consider the potential danger to those who would have to be tasked to bring them home.

There were unconfirmed reports last week that a number of Dutch women had taken refuge in a villa in Idlib in northwestern Syria, hoping to cross the border into Turkey to seek help at their Ankara embassy.