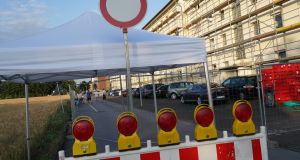 A barricade blocks access to a street next to apartment buildings fenced off and under quarantine that house mostly employees of the nearby Tönnies meat packing plant in the town of Verl. Photograph: Sean Gallup/Getty Images

Two months after Germany announced looser Covid-19 rules, an outbreak in a meat processing plant has triggered a return to lockdown in the western state of North Rhine-Westphalia.

A major meat plant in the region, supplier of one-third of pork sold in German supermarkets, was closed at the weekend after a quarter of 6,140 workers tested positive for Covid-19.

Now 370,000 people in the state’s Gütersloh region have been ordered back into their homes, with limited movement and contact except with family or household members. Then health authorities will decide on June 30th whether to lift or extend the measures, based on infection data.

State premier Armin Laschet insisted the lockdown was “prophylactic”, and the measures not as drastic as those imposed in March.

While shops and restaurants can remain open, the closure of bars, gyms and museums – just after they reopened – is likely to be highly unpopular. Just 10 days after Germany reopened its borders, the lockdown comes three days before the official start of summer holidays in North Rhine-Westphalia.

The first test of the new lockdown will come at the weekend. Temperatures are forecast to near 30 degrees in Gütersloh, meaning the renewed ban on picnics and public barbecues could spark mutiny in this corner of Germany’s most populous state, home to one in five citizens.

More than 100 test teams are now operating in Gütersloh county to track and test possible carriers of the virus. They are supported by translators – many workers are from Poland, Romania and Bulgaria – as well as 300 police.

Schools and kindergartens have been closed while apartment blocks where workers live have been surrounded by metal fences. Residents have been ordered into two-week quarantine, with local charities providing food and other supplies.

So far just 24 people in the county who don’t work at the factory have tested positive.

Local county councillor Sven Georg Adenauer, a grandson of West Germany’s first chancellor, said the lockdown was “lower-level, not as brutal” as in March.

“We can live with these measures, we had to do something,” he said.

But the lockdown is an embarrassment for Mr Laschet, a senior Christian Democratic (CDU) figure. In recent months, rivals linked his vocal demands to end unpopular lockdown measures with his hopes of being elected party leader in December.

The chancellor put her unease on the Bundestag record in mid-April, warning that federal states were reopening “hastily, too hastily”.

“Let’s not gamble away what we’ve achieved and risk a relapse,” she said.

Dr Christian Drosten, a leading epidemiologist and driving force behind the early testing, said Germany was “gambling away its lead completely”.

It was Dr Merkel who demanded a safety brake built into the lockdown lifting, obliging restrictions if more than 50 people per 100,000 of population in any county tested positive for Covid-19.

In Gütersloh, the brake was triggered by an infection rate nearly 10 times the limit. This one local spike has, in turn, seen Germany’s reproduction rate triple to nearly 3 – meaning one person infects nearly three others.

The Covid-19 outbreak and lockdown have prompted calls for the Tönnies family, owner of the meat plant, to foot the bill for the testing; others want to know if billionaire owner Clemens Tönnies used his influence over local politicians in the region to sidestep the need for external health inspections.

After years in denial on the true cost of low-price meat, Germany’s federal labour minister has promised to expedite legislation to boost rights and protections for low-paid meat plant workers, many from eastern Europe.

On Tuesday in Verl, the town nearest the Tönnies plant, locals were fuming at the idea that the German cultural love of low-cost schnitzel has hobbled their other national passion: summer holidays.

“I hope Mr Tönnies is clear what he’s done,” said local man Manfred to WDR radio, “and works to fix this.”