UK to change laws to enforce local lockdown in Leicester 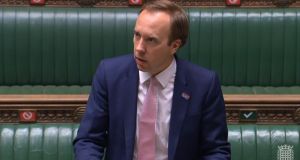 UK health secretary Matt Hancock told the House of Commons Leicester accounted for about 10% of all positive cases in the UK over the past week. Photograph: PA Wire

The UK government will change the law to enforce the local lockdown in Leicester, health secretary Matt Hancock has said.

Speaking to Sky News on Monday morning, he said: “We will be bringing forward a legal change very shortly, in the next couple of days, because some of the measures that we’ve unfortunately had to take in Leicester will require legal underpinning.”

Mr Hancock said “in some cases” the lockdown would be enforced by the police, while legal changes would be made so non-essential retail is no longer open.

When pressed on how people would be stopped from travelling outside the city, he said: “We’re recommending against all but essential travel both to and from and within Leicester, and as we saw during the peak, the vast majority of people will abide by these rules.

“Of course we will take further action including putting in place laws if that is necessary but I very much hope it won’t be.”

The city of Leicester must go back into a stricter lockdown because its Covid-19 infection rate was much higher than anywhere else in the country, Mr Hancock told the House of Commons on Monday.

Non-essential shops in Leicester will close from Tuesday and schools will close to most pupils from Thursday as part of restrictions imposed after a rise in cases, Mr Hancock told MPs.

He said the easing of the lockdown planned for the rest of England on July 4th cannot happen in Leicester because of rising cases.

He said: “Given the growing outbreak in Leicester we cannot recommend that the easing of the national lockdown set to take place on July 4th happens in Leicester.”

This means pubs, hairdressers and restaurants will not be able to open this week.

The health secretary said Leicester accounted for about 10 per cent of all positive cases in the UK over the past week, and that the seven-day infection rate there was 135 cases per 100,000 people, three times higher than the next highest city.

Mr Hancock advised people from Leicester to stay at home as much as they can while the local lockdown measures continue.

He told MPs: “Having taken clinical advice on the actions necessary and discussed them with the local team in Leicester and Leicestershire, we have made some difficult but important decisions.

“We’ve decided that from tomorrow, non-essential retail will have to close and as children have been particularly impacted by this outbreak, schools will also need to close from Thursday, staying open for vulnerable children and children of critical workers as they did throughout.

“Unfortunately, the clinical advice is that the relaxation of shielding measures due on July 6th cannot now take place in Leicester.

“We recommend to people in Leicester, stay at home as much as you can, and we recommend against all but essential travel to, from and within Leicester.

He said the measures would be kept under review and would not be kept in place “any longer than is necessary”, adding: “We’ll review if we can release any of the measures in two weeks.

“These Leicester-specific measures will apply not just to the city of Leicester but also the surrounding conurbation including, for example, Oadby, Birstall and Glenfield.

“I know that this is a worrying time for people living in Leicester and I want you to know you have our full support.

“We do not take these decisions lightly but with the interests of the people of Leicester in our hearts.”

Mr Hancock announced further measures in Leicester to help tackle the outbreak, including the setting up of a walk-in testing centre for those with coronavirus symptoms.

He said: “Anyone in Leicester with symptoms must come forward for a test.” – PA/Reuters