Hague Letter: To say the two countries have a difficult relationship is an understatement 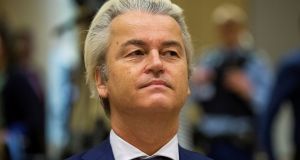 Marcin Kolczynski (37) dropped his mobile phone and dashed towards the waves crashing on to the remote Dutch beach at Julianadorp last weekend. It was the last his wife, Monika, at home in Poland, ever heard from him.

“There was a lot of background noise from the North Sea. Then Marcin said something about seeing children in the water. He said, ‘Monika, wait …’ and the line went dead. I didn’t really worry because he was fit and a strong swimmer. I thought he’d ring back at any moment.”

Kolczynski didn’t ring back, and soon Monika was trying desperately to get through to his abandoned phone while doing her best to keep panic at bay. In the background their own three babies were picking up on her distress and starting to cry.

What happened was that Kolczynski, one of thousands of seasonal workers who come to the Netherlands annually to harvest flower bulbs, was so determined to get each of the three Dutch kids in the water to safety that he neglected his own safety and in seconds was swept out to sea by a treacherous rip tide.

Because he was familiar with the beach, he knew there was no lifeguard, which meant he also knew he was probably their only hope once the children got into trouble.

An hour later, as the children were being comforted by their parents, his body was washed ashore, a mercifully short sojourn in those choppy coastal waters where retrieving the dead can often take several days of dawn-to-dusk searching.

To say that Poland has a difficult relationship with the Netherlands is an understatement. It has been punctuated over the years by rows over right-wing claims that Polish immigrants and migrant workers – such as Kolczynski – have been “stealing Dutch jobs” when the reality is that they have been providing the shamefully cheap manpower that keeps struggling low-margin industries afloat.

Most poisonous was the infamous 24-hour “anti-Polish hotline” launched by Geert Wilders and his Freedom Party, encouraging anyone with complaints, real or imagined, about their eastern neighbours to put them in writing so they could be sent to the appropriate embassies.

“Did you lose your job to a Pole, a Bulgarian, a Romanian ...” it began, before going on to assure the aggrieved that no complaint was too insignificant to be taken up and pursued to the last. “It could be anything from ‘They are sleeping on my doorstep’ to ‘They are still barbecuing late at night’.”

The Polish embassy intervened, describing the hotline as “discriminatory” and designed to drive a wedge between the Dutch public and the Polish community.

But when prime minister Mark Rutte’s government – which at the time was being propped up from the opposition benches by Wilders – had an opportunity to decry the hotline and have it taken down, political expediency trumped good judgment and moral authority.

Social affairs minister Hans Kamp backed away from challenging Wilders, saying it was “up to political parties to do as they see fit”, though Wilders, long used to being the tail that wagged the dog, ruthlessly pulled the plug on the coalition days later in any case.

Most notorious of all in terms of its reputation for maltreating immigrant workers is the Dutch meat processing industry.

Last year the Polish ambassador lodged a formal protest with the government, claiming labour laws were being routinely “abused” in the industry in order to “exploit” migrant workers, and alleging collusion between large employers and the recruitment agencies they paid.

That complaint was echoed a few months ago at the start of the Covid-19 crisis by the Romanian ambassador in the Netherlands, who said nothing appeared to have changed – and demanding, once again, better policing of working conditions in the industry.

There’s no doubt that all of these tales of the exploitation, abuse and cruelty that play out in plain sight year after year were very much in the air when Marcin Kolczynski drowned at the weekend.

A fund to help his wife and family had raised some €350,000 as of Tuesday evening.

“He was a hero,” said one of the organisers, a woman of Polish descent. “People look on all the time when these things happen and do nothing. Marcin went straight into the sea …

“When I found out he was a seasonal worker, that was enough. I knew what that meant in the Netherlands. I knew his family would need help. Everyone knows. Everyone knows and nothing changes – even for heroes.”