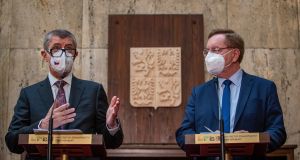 The Czech Republic has appointed its fourth health minister of the pandemic after Jan Blatny was sacked following disagreements with the country’s leaders over the use of experimental Covid-19 treatments and vaccines that do not have EU safety clearance.

Czech prime minister Andrej Babis criticised Mr Blatny’s wariness towards new coronavirus medicines, and president Milos Zeman said his refusal to approve Russian and Chinese vaccines had cost lives in the country which, according to Our World in Data, has the world’s highest overall per capita death rate from Covid-19.

“In my opinion the reason behind my dismissal was political,” Mr Blatny said on Wednesday, when he was replaced as health minister by Petr Arenberger, a Prague hospital director.

“I want to say that my conscience is clear. All the decisions that I made in office were based on my best professional judgement and medical opinions,” Radio Prague International quoted Mr Blatny as saying.

“I have been unwavering in defence of my position that we only use registered vaccines ...The same goes for drugs used to treat Covid. To me it is vitally important that I know that the drug administered will not only help but will not harm the patient.”

Mr Zeman, a strong critic of the EU and advocate of closer ties with Russia and China, asked both those countries to supply the Czech Republic with vaccines.

“Each of us should strive to have as many effective vaccines as possible,” Mr Zeman said after appointing Mr Arenberger. “But unfortunately your predecessor and the director of [national drug regulator] SUKL blocked the process.”

Mr Babis said he disagreed with Mr Blatny “on how the health department should work”, but denied that his refusal to fast-track Russia’s Sputnik V vaccine was the main reason for his dismissal.

“I want to stress that this is not about Sputnik...We will wait for the decision of the EMA,” he said, referring to EU regulator the European Medicines Agency.

In neighbouring Slovakia, scientists are still assessing Sputnik V more than a month after then premier Igor Matovic decided to buy two million doses from Russia, sparking a government crisis that led to his resignation.

Magdalena Jurkemikova, a spokeswoman for Slovakia’s drug safety regulator, said the agency had been unable to make a full evaluation of Sputnik V due to a lack of data from its Russian producer and other issues.

The Moscow-based developers of the vaccine said reports “that somehow Sputnik V vaccine in Slovakia is different from Sputnik V in clinical trials...are fake”.

Hungary is the only EU member using Sputnik V and China’s Sinopharm vaccine. Its government allowed non-essential shops to reopen on Wednesday after a target of administering 2.5 million vaccine shots was met, even as the country reported 311 new deaths from Covid-19, its highest one-day toll.