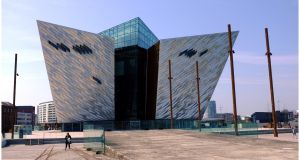 Titanic Belfast is relying on ‘substantial government assistance’ due to the negative impact on trading of Covid-19. Photograph: Bryan O’Brien

The company behind one of the island’s most popular visitor attractions, Titanic Belfast, has been using extensive cash reserves and the UK government’s furlough scheme to sustain the business during Covid-19.

Accounts for Titanic Belfast Ltd show the attraction enjoyed “a very successful trading year” before Covid-19 shut down the business for protracted periods during the pandemic.

The company paid out a dividend of £3.75 million, more than twice the £1.65 million paid in the previous year.

The directors noted that when allowed to open during the pandemic, Titanic Belfast “has experienced a circa 70 per cent reduction in visitor numbers given the lack of international visitors”.

The accounts said Titanic Belfast was relying “on substantial government assistance which is being provided to mitigate the negative effects on trading due to the Covid-19 pandemic”.

Titanic Belfast has secured £1.63 million in Heritage Lottery Funding from the Department of the Communities, the accounts noted.

The directors also said Titanic Belfast was relying on the forbearance of the Maritime Belfast Trust in respect of contractual commitments of money to be paid annually relating to a sinking fund for exhibition upgrades.

They state the company “has reached agreement in principle for the deferment of these payment obligations”.

The company recorded a post-tax profit of £2.88 million after paying corporation tax of £603,841. Accumulated profits decreased from £2.77 million to £1.9 million.