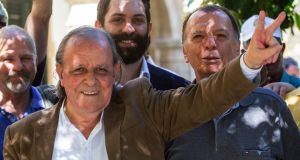 Two Turkish-Cypriot journalists, one of them a candidate for the European Parliament, have been cleared by a north Nicosia court of insulting Turkey’s president Recep Tayyip Erdogan.

Sener Levent, editor of the opposition newspaper Afrika, and journalist Ali Osman Tabak had faced five-year jail terms for publishing a cartoon depicting a classical Greek statue urinating on the head of Erdogan. The caption was; as “seen through Greek eyes”.

The Turkish Cypriot daily Yeni Duzen reported that the court saw the caricature as criticism through satire and ruled it “did not constitute an insult”. This is a brave legal precedent in a land indirectly ruled by authoritarian Ankara.

The cartoon originally appeared online in Greece in 2017 during a visit to Athens by Mr Erdogan, where he outraged his hosts by calling for changes in borders between Turkey and Greece, accused Greece of discrimination against ethnic Turkish citizens, and reaffirmed Turkey’s role as protector of Turkish Cypriots in the northern 36 per cent of Cyprus occupied by Turkey in 1974.

The cartoon was subsequently published by Afrika.

The two men were also acquitted of a second charge of “inciting hatred of a foreign leader with the aim of spoiling the friendly and peaceful relations be- tween the two countries”, namely Turkey and the breakaway Turkish-Cypriot entity recognised only by Ankara.

Levent called the ruling a “historic decision” that would contribute to the Turkish-Cypriot struggle for independence from Ankara.

He pointed out he and Mr Tabak “are citizens of the Republic of Cyprus and of the EU”. If the case had taken place in Turkey, where scores of journalists have been jailed, “the “outcome would have been very different”, Levent said.

The acquittal coincided with campaigning for the May 26th European Parliamentary election in which Levent is standing with five other Turkish-Cypriot candidates.

Another Turkish Cypriot, academic Niyazi Kizilyurek, is running on the list of the Greek-Cypriot communist Akel party and is expected to be the first Turkish Cypriot to become an MEP. Special voting centres are to be established in the republic for Turkish Cypriots.

Since 2003 when crossings opened between the Greek-Cypriot republic and the Turkish north, 120,000 Turkish Cypriots have received Cyprus citizenship out of the 130,000 members of their community remaining in the north. Some 80,000 are registered to vote. Turkish-Cypriot numbers have been diminished by emigration while 185,000 mainlanders have settled in the north.

Participation in the European Parliament elections is, for Turkish Cypriots, a way to assert independence.