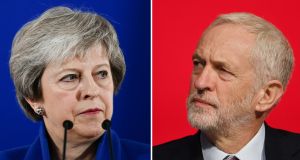 British prime minister Theresa May could give MPs a chance to consider a series of options for Brexit in indicative votes following the collapse of her government’s talks with Labour. The proposal was outlined in a document leaked from the talks, which suggested that the votes could take place before the Withdrawal Agreement Bill (WAB) is debated next month.

The government’s proposal would see MPs vote on whether Britain should leave the EU with a deal; that the deal should not be put to a second referendum; on options for a customs union; and on protection of environmental and employment rights.

Each side blamed the other for the end of the talks, which Jeremy Corbyn announced in a letter to the prime minister on Friday morning. The Labour leader said that although the talks were detailed and serious and had been conducted in good faith on both sides, important differences remained.

“Even more crucially, the increasing weakness and instability of your government means there cannot be confidence in securing whatever might be agreed between us,” he wrote.

“As you have been setting out your decision to stand down and cabinet ministers are competing to succeed you, the position of the government has become ever more unstable and its authority eroded. Not infrequently, proposals by your negotiating team have been publicly contradicted by statements from other members of the cabinet.”

The prime minister said the government would consider what had come out of the talks but she blamed divisions within Labour over a second referendum for their failure.

“There have been areas where we have been able to find common ground, but other issues have proved to be more difficult. In particular, we haven’t been able to overcome the fact that there isn’t a common position in Labour about whether they want to deliver Brexit or hold a second referendum to reverse it,” she said.

Mrs May was speaking at a low-key launch of the Conservatives’ European elections campaign in Bristol, in a small room with some MEPs, no supporters, two television cameras, two photographers and one political journalist present. A YouGov poll on Friday ahead of next week’s elections put the Conservatives in fifth place on 9 per cent, with Nigel Farage’s Brexit party in the lead on 35 per cent. The poll put Labour on 15 per cent, one point behind the Liberal Democrats’ 16 per cent, with the Greens on 10 per cent.

A separate YouGov poll of Conservative party members for the Times gives Boris Johnson a commanding lead with 39 per cent, with three times the support of his closest rival Dominic Raab on 13 per cent. The poll puts environment secretary Michael Gove and home secretary Sajid Javid on 9 per cent, with foreign secretary Jeremy Hunt on 8 per cent.