Reproduction number stands at record high of between 2.4 and 3 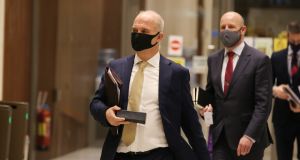 The reproduction number for Covid-19, a key measure of how fast the disease is spreading, now stands at between 2.4 and 3, higher than at any time since the start of the pandemic.

High levels of socialisation and contact, but also the growth in new variant cases, explain the rise in this figure, which has never been above 1.6 since the beginning of the first wave, public health officials say.

“We are beginning to be concerned, over the past two weeks, that the new variant is playing a role in the high transmission we are seeing,” said Prof Philip Nolan, chair of the National Public Health Emergency Team’s epidemiological modelling advisory group.

The proportion of Irish cases linked to the new variant first identified in the UK last month has risen from 9 to 13 and then 25 per cent in the last three weeks of 2020, according to limited genetic sequencing carried out by the National Virus Reference Laboratory.

A further 10 deaths of Covid-19 patients were reported by Nphet on Thursday. This brings to 2,307 the total number of deaths in the pandemic.

Nphet also reported 6,521 new confirmed cases of the disease, bringing to 127,657 the total number of cases in the Republic.

Prof Nolan said disease levels were “exceptionally high” and growth rates were the highest seen since the early days of the pandemic in March.

ICU numbers have doubled since last week and the average number of deaths per day have increased from seven to 11.

About 23,000 Covid-19 tests a day are being processed, and the positivity rate is 21 per cent, rising to 27 per cent among tests processed in public health labs alone.

There were some early signs of a slow-down in growth rates but there was still “a considerable way to go”, according to Prof Nolan, who urged people to “continue and redouble” their efforts to stop transmission of the virus.

The number of new cases per day may be beginning to plateau at about 6,000 “but we’ll know more in the coming days”, Prof Nolan said.

The number of close contacts of adult cases has fallen from 4.8 to three.

As a result, Nphet has revised its projections slightly downwards, and is now forecasting between 1,200 and 2,500 patients in hospital by mid-January, and 200 and 350 people in ICU, under one scenario.

Prof Nolan said he was still “gravely concerned” about the progression of the disease, and pointed out that it will be tougher to get it under control if the new variant spreads.

On Thursday afternoon, there were 1,043 Covid-19 patients in hospital, including 96 in ICU. The last 24 hours saw 99 additional hospitalisations.

The 14-day incidence stands at 936.4 cases per 100,000 people, with Monaghan, Louth and Limerick recording the highest county figures and Tipperary and Wicklow the lowest.

The five-day moving average of cases stands at 6,147.

There have been 41 deaths of Covid-19 patients so far this month, compared to 163 in December.

Prof Nolan said the incidence of the disease among over-65s remains worryingly high, while that among younger people, while high, is at or below the general average.

Thus, the incidence among under-12s is less than half that for any other age group.

Chief medical officer Dr Tony Holohan described the figures as “the worst set of data we’ve ever had to consider”. But there have been a few “signs of encouragement” in the figures of recent days that may indicate that progress is being made.

Any measures that would help reduce the consumption of alcohol to help limit the spread of the virus would be welcome, he said.

Nphet’s approach will be to try to slow the spread of the new variant to allow more time for the vaccine to be rolled out, he said.

Earlier, the HSE confirmed that the number of people sick in the State’s hospitals with Covid-19 had passed 1,000 for the first time.

Health Service Executive (HSE) chief executive Paul Reid described it is as a “sad milestone that nobody wanted to happen”.

“It concerns me relaying this,” he tweeted. “But I do know we will get through a tough time ahead with your help. At the other side, it will be better.”

Covid-19 and stillbirth: What does the latest research say about possible complications?