Round-up: Outbreaks in Galicia and Catalonia as Israel faces second wave of infections 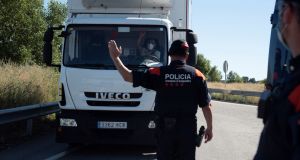 Police officers stop a vehicle at a checkpoint in the Segrià region of Catalonia, northeastern Spain on Saturday. Photograph: Ramon Gabriel/EPA

Spain has ringfenced more than 70,000 people in Galicia in the second local lockdown ordered in as many days, as one of Europe’s worst-affected countries in the Covid-19 pandemic scrambles to contain new flare-ups.

About 3,000 residents of public housing tower blocks in Melbourne, Australia have also been confined to their apartments, with police officers stationed on every floor, in an illustration of the difficulty countries face in keeping coronavirus curves down after they have been flattened.

The detection of more than 250 cases in Spain’s northwestern region of Galicia, nearly half of them in the province of Lugo, has prompted a new lockdown until Friday, which includes a ban on people leaving or entering the coastal community of La Marina except for work.

Similar measures were imposed in Catalonia on Saturday. Spain’s prime minister, Pedro Sánchez, told a political rally on Sunday that people should be vigilant but should feel encouraged by the swift response. “The early detection of these outbreaks shows the health system is much better prepared” than in March, he said.

Residents of nine public housing blocks in Melbourne learned on Saturday evening that they would be confined to their dwellings for at least five days, and possibly for as long as two weeks.

About 300,000 people across the state of Victoria have been placed under less onerous lockdowns as the local government struggles to contain a second peak in cases.

Numbers continued to rise in other countries that started lifting their lockdowns weeks ago to mitigate the pandemic’s economic impact. The Philippines reported its largest single-day jump in new infections on Sunday, 2,434, taking the total to more than 44,000, the health ministry said. There were seven new deaths, making it 1,300 overall. Officials attributed the growing number of cases to increasing contact between people as quarantine measures have been eased.

Infections in Saudi Arabia surpassed 4,000 a day again after dipping briefly, taking the total in the worst-hit country in the Middle East past 200,000. The neighbouring United Arab Emirates surpassed 50,000 cases on Sunday, but still plans to reopen Dubai, its commercial hub, on July 7th.

Israel’s health minister, Yuli Edelstein, said the country was facing a second wave of the virus after 977 new cases were reported on Sunday, the highest daily number so far. The prime minister, Binyamin Netanyahu, said at a cabinet meeting on Sunday: “We are at the height of a new corona offensive. This is a very strong outbreak that is growing and spreading in the world and also here.”

Tens of thousands of Israelis were ordered into quarantine on Thursday, and the country’s domestic spy agency has been asked to use its phone surveillance technology to assist with contact tracing. The existence of the tracking system was first disclosed when the virus reached Israel. Under challenge from civil rights groups, the cabinet said it could only be used if the spread of the virus became an emergency.

Cases are also growing at their fastest rate so far in the West Bank, where residents were ordered to stay at home on Friday. Movement between Palestinian cities and towns will be heavily restricted for at least the next five days. Palestinian authorities reported more than 500 new cases, taking the total to 3,835 since the outbreak began.

Greece said it would not let any Serbian visitors enter the country until at least July 15th, as it tries to balance controlling the virus with allowing its important and lucrative tourism industry to function. Serbia declared a state of emergency in Belgrade on Friday, reimposing some restrictions to slow Covid-19 after a surge of infections in the capital.

Iran’s health ministry said on Sunday that 163 people had died in the past 24 hours, the highest figure recorded since the outbreak was recognised in the country. More than 11,500 are known to have been killed by the virus overall. The government ordered citizens to wear face masks in public after admitting that its efforts to introduce voluntary social distancing were not working.

The president, Hassan Rouhani, said: “Anybody who doesn’t wear a mask should be refused services, and if a government employee doesn’t wear one, he/she should be marked as absent.” Anyone not wearing a mask would also be prevented from using public transport, he said. – Guardian