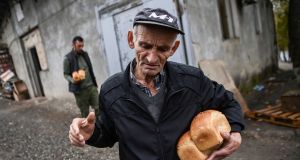 An elderly man receives free bread from a bakery in the city of Stepanakert. Photograph: Aris Messinis/AFP via Getty Images

The children are gone and only a few women remain. Stepanakert, the de facto capital of Nagorno-Karabakh, has become a city of men. The streets are quiet aside from the odd ambulance, military Jeep or Lada banger grunting along. The supermarket shelves are thinning and the menu options at the Armenia Hotel leave much to be desired.

So much of this war between Azerbaijan and Armenia, which erupted on September 27th, is from another time. In the south it’s mostly trench warfare, where young men huddle in shallow narrow trenches. Decaying bodies are scattered across no man’s land – there are reports of wild pigs tearing at rotting flesh at night.

In villages, families are packed on to buses and sent to Yerevan, Armenia’s capital. Some refuse to leave and retreat to a life underground. Every day brings rumours of Azeri advances, fresh propaganda and stories of loss.

In Stepanakert you can talk about the war, but you cannot analyse it. The Armenians’ love for this land, and their willingness to die for it, has hindered their ability to talk about it frankly. A dark flash crosses their face when you mention Azeri gains or press for facts about strategy.

They are a nation of fighters and firmly believe their fighting spirit, coupled with their advantage of having the higher ground in Nagorno-Karabakh, will save them in the end. When asked in an interview with this reporter how the Armenians can defend against Azeri drones, which have been supplied by Turkey and Israel and have inflicted heavy losses, the president of Nagorno-Karabakh, Arayik Harutyunyan, said: “This is a sacred war, and the side who fights a sacred fight, wins.”

At the media centre in Stepanakert, which tightly shepherds international journalists, every opportunity to show us a shot-down drone is taken. The reality is the Armenians can’t defend the sky on their own: they need support from outside, and that has been slow to come.

If someone randomly hands you a piece of fruit in Nagorno-Karabakh it’s not because they think you’re hungry. They are giving you a part of their home which they have had to flee because of the fighting. It’s a tender moment and should be treated with respect.

On the many minibuses out of Stepanakert, the bag of fruit is treated with a special reverence. It’s likely the succulent apples and king oranges, which are called Arqayanaring, will fade before the end of this most recent escalation. After three humanitarian ceasefire announcements, the bellicose rhetoric and fighting continues – but the fruit is symbolic of the essence of this conflict. On both sides it’s about ownership of every blade of grass in Karabakh.

On Tumanyan Street, Hovik Asmaryan and his wife Isabel, Syrian Armenians from Aleppo, serve free meals all day to soldiers and journalists alike – “It’s my duty to my country,” Hovik says.

One of the most remarkable meals this reporter has had in Nagorno-Karabakh was served on the front line in the company of a group of young soldiers aged between 18 and 20. Arthur, a cheeky boy of 18, was working as a chef before the war and had taken over kitchen duties in the trenches.

Without a moment’s notice he whipped up some chicken with lentils and bread. It was wholesome and honest and came peppered with questions regarding how much carbohydrates the Irish eat compared to the Armenians. The decision was made not to debate such a contentious issue – there would be no winner.

Daily life is quiet in Stepanakert but wrapped around the silence is a determination to win the war. The people here are a broad cast of characters. The well-dressed family alone in a shelter every night drinking Karabakhti vodka in memory of the dead. The young soldiers guarding the hotels who are glued to social media, waiting to be called up to the front.

The volunteers asleep in hotel lobbies after walking 4km across the worst front lines under heavy shelling to deliver supplies to the troops. The Baudelaire-loving colonel in a military bunker sitting with a Finnish rifle and reading Dante’s Divine Comedy.

The city seems oblivious to the encroaching front line. This is both a comfort and a cause for concern. Mass is still said daily, and the bakeries still churn out delicious fresh bread. It could be the calm before the storm, or the energy these men need to protect their homeland.