Coronavirus: Bars and cafés in Paris to close for two weeks

City moves to ‘maximum alert’, with ban on student parties but restaurants to stay open 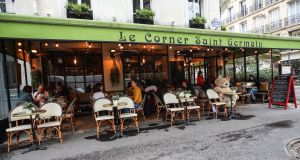 People sit on a bar terrace in Paris on Monday. Photograph: Mohammed Badra/EPA

The French government has ordered the closure of bars and cafés in Paris for two weeks from Tuesday after declaring the city and its nearest suburbs to be zones of “maximum alert” for coronavirus infections.

“Today we are entering a new phase,” said Didier Lallement, the Paris police chief, as he outlined the restrictions, including a ban on student parties, the closure of swimming pools for adults, and a reduction in the number of shoppers allowed into malls and department stores.

Marseille and Aix-en-Provence in the south of France, as well as the Caribbean island of Guadeloupe, have already been placed in the same “maximum alert” coronavirus category after a surge of infections and hospitalisations in recent weeks.

However, the government has decided to grant a reprieve to France’s restaurants – currently closed in Marseille – and will impose stricter measures to allow them to reopen or remain open even in high-infection zones.

President Emmanuel Macron has said France must learn to “live with” the virus and says he is determined to avoid another nationwide lockdown like the two-month closure in the spring that triggered a deep economic recession.

Anne Hidalgo, Paris mayor, said the capital’s economy was very dependent on international trade and tourism and had been badly hit by the absence of visitors, making it essential to maintain the city’s democratic, cultural, economic and social life as far as possible.

Aurélien Rousseau, regional health director, said 3,500 new coronavirus cases were being recorded each day in the Paris area, which now had more than 200 active infection “clusters”.

“The impact on hospitals is real and is getting more serious each day,” he said, noting that 36 per cent of intensive care beds were already taken by Covid-19 patients, which would rise to 50 per cent in two weeks. He added that 115 of the region’s 700 old people’s homes had at least one resident sick with the virus.

Health minister Olivier Véran said last week that Lille, Lyon, Grenoble, Toulouse and Saint-Etienne might also this week cross the infection and hospitalisation thresholds that would push them into the “maximum alert” category.

On Sunday night, the national health department said 1,335 patients were being treated for Covid-19 in intensive care units of French hospitals. The number of new cases confirmed by tests in the previous 24 hours was 12,565. An additional 32 deaths were reported, raising the official death toll since the start of the pandemic to 32,230.

“A reinforced health protocol to be applied in high alert and maximum alert zones will be put in place and will allow restaurants to remain open,” the prime minister’s office said. Further details to be announced later on Monday may include temperature checks on customers and a requirement to register them for tracing.

University lecture halls can operate at only half-capacity from now on, following high levels of mostly asymptomatic infections among students. – Copyright The Financial Times Limited 2020