Covid-19: What happens under Level 5 and why has NPHET sought more restrictions? 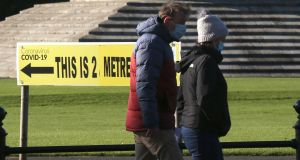 In the past month, the five-day average of coronavirus cases has gone from 99 a day to 463 a day, a near fivefold increase. Photograph: Stephen Collins/Collins

The National Public Health Emergency Team (NPHET), concerned at the rise in Covid-19 cases, has recommended that the entire State be moved to the most severe level of restrictions contained in the Government’s five-stage roadmap for fighting the disease.

What exactly has NPHET asked the Government to do?

NPHET met yesterday to consider the increase in cases after a further 613 were reported on Saturday, the highest number since April. It met to discuss how the virus was spreading and its possible effect on the health system.

The team concluded that the State should move to Level 5, the highest alert level in the Government’s strategy, for four weeks.

This would be a marked escalation in the scale of the response, moving Dublin and Donegal from Level 3 and the rest of the country three from Level 2.

The team’s meeting was chaired for the first time in three months by chief medical officer Dr Tony Holohan, who has just returned after taking temporary leave for family reasons.

What happens under Level 5?

This level is as close as we can come to the lockdown experienced in March, April and early May when the pandemic was at its worst in the country.

Only essential retailers would be permitted to open and people would be advised to stay home and can only exercise within 5km of their homes.

Public transport capacity would be reduced to 25 per cent and people would be advised to avoid buses, trams and trains except for essential purposes.

No indoor or outdoor organised gatherings or sporting events could take place. Bars, pubs, cafes and restaurants would only be permitted to sell takeaways or to deliver food and drink. All museums, galleries and other cultural attractions would be closed.

The main difference between a Level 5 lockdown and the first full lockdown is schools, creches and higher and adult education facilities would remain open, though with protective measures in place.

How serious a move would this be?

It would result in very significant changes to life in Ireland. It would mean shutting off contact with anybody not in your household. There would be no gatherings other than small numbers at funerals and weddings.

In counties other than Dublin and Donegal, it would mean 40 fewer people at funerals than is currently permitted. It would result in the closure of all but essential businesses putting more people out of work again in businesses deemed non-essential.

It would amount to the most severe measures to stem the spread of Covid-19 since the Government’s first lockdown started to be lifted almost five months ago.

Why has NPHET come to this view?

All metrics used to track the disease have risen sharply over recent weeks as infections have increased as a result of greater numbers of contacts between members of the public.

In the past month, the five-day average of cases has gone from 99 a day to 463 a day, a near fivefold increase.

There were 924 family outbreaks of the virus in September, compared with 530 in August.

Not necessarily. The Covid-19 oversight group, which is made up of the State’s highest ranking civil servants, will consider NPHET’s recommendation before it goes to Cabinet. Following that process, the Government may decide to take more limited action based on not just the public health advice but the societal and economic impact of the measures.

What happens next then?

It is hard to say. NPHET’s recommendation took members of the Government by surprise last night with some remarking privately how difficult it would be to sell another effective lockdown to a public exhausted by the Covid-19 restrictions over the past six months.

The Government must not only weigh up the public health advice and the risks to people’s health and the hospital system but the effect of further restrictions on society and the economy.