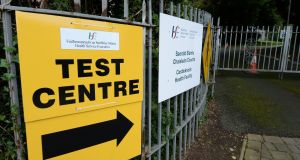 Many will claim to have the solutions to the Covid-19 crisis but the honest answer is that no-one really knows the right way to get through this pandemic, so unparalleled in modern times. Photograph: Alan Betson/The Irish Times.

Ireland really is at a shocking, depressing impasse in the fight against Covid-19. It could be that things are as bad as the National Public Health Emergency Team (NPHET) believe them to be, and will continue to worsen.

The precise rationale for NPHET’s reaching for the biggest sledgehammer in its current armoury - Level 5 restrictions - will become known as the day progresses, but it’s likely to be be based on a fear of exponential growth in cases and hospitalisations that could soon overwhelm the health service.

Or, it could be that NPHET’s gambit for the most severe restrictions is a tactical device, designed to scare people off bad behaviours and procure agreement from the Government for nationwide Level 4 measures.

If that is the case, and the Government faces down public health officials by refusing to agree to their recommendations, the trust in both Government and NPHET will suffer.

It could also be the case that NPHET is simply wrong, or at least unbalanced by failing to take adequate account of the impact of its recommendations on non Covid-19 healthcare and the general economic and social wellbeing of society.

Many will claim to have the solutions but the honest answer is that no-one really knows the right way to get through this pandemic, so unparalleled in modern times. Inevitably, mistakes will be made - have been made - but the point is to apply the best science and other learning to the problem so it can be resolved.

It was Albert Einstein who defined insanity as “doing the same thing over and over again and expecting different results”. So are we being insane by contemplating another lockdown?

The downsides: the further destruction of economic life, damage to people’s morale and mental health.

Lockdown “worked” last time by stopping the circulation of the virus. But if the disease comes back once restrictions are lifted, as it has, has it really worked?

Are we not just kicking the can down the road, all the time hoping for a vaccine that is being rushed to development at breakneck speed?

Have our public health officials earned the right to impose a lockdown for a second time, given the failure to keep the virus in check over the summer? Or is it our own fault? Did we all “party too long”, as the accusation went during our economic collapse of a decade ago?

The summer was a wasted opportunity, when the chance was missed to put in place proper testing and contact tracing operations, as well as a set of measures specifically designed to protect those most at risk from the virus.

As a result, public health officials are again reaching for the “blunt instrument” in the form of a nationwide lockdown, despite the fact that the curve is flattening (a bit) in Dublin and going down in some counties.

No attempt has been made to set up a system for enforcing the rules that are there in a proportionate manner, not even for travellers coming into the country.

Arguably, the nuances of the Government’s framework plan have been lost on many people, leading to a realisation that “one size fits all” recommendations work better in terms of compliance or at least acceptance.

However, NPHET will have to come up with a pretty good explanation of what happens after a second lockdown if they want people to enter that dark tunnel this week.