Reunited Germany, 30 years on: ‘We have a permanent hullabaloo’ 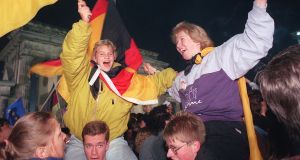 Youths wave German flags during the celebration of the country’s reunification at the Brandenburg Gate in Berlin October 3rd 1990. Photograph: Gilles Leimdorfer/AFP via Getty Images

Here’s some free advice, included in the price of today’s Irish Times: if you ever need someone to retool your national sovereignty, best ask a German and not someone from the United Kingdom.

Nearly 1,600 days after the UK voted to leave the European Union, and with trade talks hurtling towards disaster, they’re still not yet fully free.

Compare that with October 3rd 1990: just 328 days after they breached the Berlin Wall, the most hated symbol of their division, teary Germans sealed their country’s unification 30 years ago this evening on the steps of the Reichstag. Only now, though, are a majority of Germans finally realising what unification was – and wasn’t.

“Germany unity is not a state of affairs that is wrapped up and completed just once, but rather a continual process,” said Chancellor Angela Merkel, “a constant mission that affects all Germans.”

The fall of the Berlin Wall in 1989 may have been a historical accident, but German unification was a triumph of state-craft. Just 19 days after the inner German border was opened, West Germany chancellor Helmut Kohl surprised the world with a 10-point plan demanding free, fair elections in the GDR and German unification.

Heading east to Dresden a month later, he buried the idea of a two-state solution, telling a euphoric crowd: “My goal, if this historic hour allows it, remains the unity of our nation.”

The following months passed in a blur: elections for the first – and last – democratic eastern German parliament in March, 1990. On August 22nd, 1990, at 9.09pm, that parliament voted in favour of East Germany’s accession to West Germany after 41 years, effectively voting the state – and its parliament – out of existence.

The unification treaty itself is actually two documents. The first treaty, governing economic, social and monetary union, came into effect on July 1st, 1990. The treaty is most memorable – notorious even – for the 1:1 exchange rate between the largely worthless Ostmark and the Deutschmark, up to 6,000 DM.

This exchange rate was a popular boost for easterners, giving them undreamed of purchasing power in 1990 to buy new cars, fridges and furniture.

While politically and psychologically understandable, many economists say Dr Kohl’s decision was a disaster from an economic perspective.

“Overnight, all GDR companies had to pay wages and obligations in Deutschmarks they didn’t have, and they became insolvent,” said Karl Otto Pöhl, the Bundesbank head at the time of unification, before his death in 2014.

That forced many firms to apply for loans to a new state trustee, the Treuhand, which in turn wound up many of the firms – or sold them off to western competitors.

While many of the firms were antiquated beyond rescue, it’s impossible to over-estimate the lingering resentment and humiliation many easterners feel over this period.

The Treuhand was so unpopular that its head, Detlev Rowedders was shot dead in 1991 – a murder that, still unsolved and swaddled in conspiracy theories, is now the subject of a new Netflix documentary, A Perfect Crime.

The second treaty begins with a nice preamble about the peaceful unification arising from “the wish of the people in both parts of Germany” but, drops the pretence in the first chapter – “accession”.

Eastern negotiator Günther Krause estimates around 60 per cent of eastern wishes were fulfilled, despite the sombre attitude of his western counterpart, then interior minister Wolfgang Schäuble: “‘This is about bringing the (east) German Democratic Republic into the (western) Federal Republic,’ he told us, not the other way around.”

A new survey by the Bertelsmann Foundation suggests that few Germans bought into the simple, sentimental unification narrative presented in 1990.

“In the east, German unity is about the history of the peaceful revolution and the Monday demonstrations [against the regime] that brought about the Wende, the transformation,” said Mr Kai Unzicker, author of the Bertelsmann study. “The history in the west is all about East Germany’s failure, its economic and political deficiencies out of which unification inevitably had to follow.”

A similar pattern of divergence can be found in the latest survey from the Pew Research Centre, after similar polls in 1991 and 2009.

With memories of the Treuhand still strong, 84 per cent of East Germans think good things about their country were lost or dumped (while just 48 per cent of westerners agree).

And while two thirds of westerners are satisfied with their democratic system, easterners are more ambivalent, divided almost 50:50. The difference in political views is marked, too: easterners, dissatisfied with mainstream political parties, are twice as likely to support for the far-right Alternative für Deutschland.

Despite challenges of the last decades, and the ongoing Covid-19 uncertainty, the Pew survey found Germans are happier now than at any time since 1990.

Sixty per cent of East Germans feel like second-class citizens and 85 per cent of over-55 easterners say they deserve more recognition for bringing about Germany’s first peaceful revolution, and for adapting in middle age to an entirely new system, with no manual

She can still remember the ambivalence of unification as a 16-year-old freedom and new opportunities for her generation, tinged with insecurity and worry about parents whose existence were shattered.

“We had only ourselves to depend on and had to learn quickly,” Schwesig told the Bild tabloid.

That lingering ambivalence is clear in the Bertelsmann Foundation survey showing 60 per cent of East Germans feel like second-class citizens and 85 per cent of over-55 easterners say they deserve more recognition for bringing about Germany’s first peaceful revolution, and for adapting in middle age to an entirely new system, with no manual.

Rather than look back, Schwesig sees it as the task of her generation to press ahead and call-out cliches about her region in German politics and in the media.

“In reports you get the feeling eastern Germany is nothing but dissatisfied people and right-wing extremists,” she said. “If Bavaria defends its interests against the rest of Germany it’s viewed as strength. If easterners do it, they talk of ‘whingeing Ossis’.”

Even now, many western Germans struggle to understand easterners’ feelings of dissatisfaction or lack of recognition. After all, they say, for half of the last 30 years, Germany has had in Angela Merkel an eastern woman as its leader.

But it’s telling that it took until last July for Germany to appoint an eastern-born judge to the constitutional court in Karlsruhe.

Acknowledging that easterners were – and are – different, and that this is a good thing, is the latest turning point in Germany’s fascinating journey back to its historical roots as one heterogeneous, sprawling nation of many unique parts.

Like a family, the German debate over unification eventually turns to money matters. And yet an obsessive focus on the cost of unification -– at least €2 trillion and counting – often drowns out recognition of the value to the economy of a modern infrastructure in eastern states.

Unification was financed largely by the little-loved “solidarity” levy. Calculated at 5.5 per cent of income tax, and raising nearly €11 billion annually and, next year, will be abolished for 90 per cent of German taxpayers – effectively a tax cut for 35 million people.

The growing recognition as this Germany celebrates its 30th birthday is the impossibility of pouring different memories and lived experiences into a one-size-fits-all unification mould. Germany east and west has every right to remain as different as Germany north and south.

And yet, as the major rebuilding work comes to a close, some eastern German thinkers suggest the work ahead in the coming years will require a more complicated dive into the country’s complicated past.

Writer Ines Geipel likens the situation now to West Germany’s post-war era. When the rush to rebuild the country yielded the “economic miracle”, eventually the country had to confront its denial over what they had done to the world – and to themselves – in the vanished Nazi dictatorship.

“The abandoned inheritance of the east has no point of consensus, it remains a black hole,” she said. “What is still lacking is a historic mapping, a real look at the vehemence of the eastern German experience. Instead we have a permanent hullabaloo.”