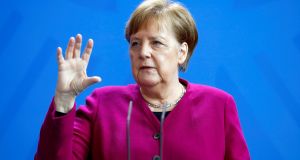 German chancellor Angela Merkel speaks during a media briefing on coronavirus, in Berlin on Thursday. Photograph: Markus Schreiber/Pool via Reuters

Chancellor Angela Merkel has urged Germans to stay at home over Easter despite “cautious optimism” that movement restrictions are slowing the spread of coronavirus.

Deaths from the Covid-19 epidemic in Italy rose by 610 on Thursday, up from the 542 increase the day before, and the number of new cases also came in higher at 4,204 from a previous 3,836. This comes as a disappointment to a country in lockdown since March 9th, anxious for clear signs that the virus is in retreat.

The total death toll in Italy since the coronavirus outbreak came to light in the country on February 21st rose to 18,279, Italy’s Civil Protection Agency said, the highest death toll from the virus in the world.

After two days of increasing figures, the daily rate of increase in the coronavirus death toll in Spain dropped on Thursday to 683 people in the previous 24 hours, taking the total death toll there to 15,238.

“Even if one day sees fewer people infected, if we forget everything we’ve done and learned, very quickly we’ll be back where we were,” she said. With an eye on a looming, sunny Easter weekend, she urged Germans “not to lose their head”. “I know from myself: you have a bit of hope, confidence, you relax a bit inside and are then careless,” she said. “We have to stay concentrated, disciplined; the situation is fragile.”

As Germany enters its third week of lockdown measures, the shutdown of public life means Europe’s largest economy is set to shrink by 9 per cent in the second quarter alone.

That has increased pressure on Dr Merkel from regional leaders and business managers to present at least the outline of an exit strategy similar to that of neighbouring Austria. This week Vienna announced a staggered reopening in May of schools, smaller shops and some businesses.

Armin Laschet, state premier of the western state of North Rhine-Westphalia, warned on Thursday that an extended lockdown brought dangers other than the virus: a rise in domestic violence, as well as isolation among elderly citizens.

“Solutions have to be found that unite freedom and health,” said Mr Laschet, a hopeful to be the next leader of Germany’s ruling Christian Democratic Union (CDU).

His rival for the top job, Friedrich Merz, has called for Germany’s schools to be reopened.

“It could be a process of trial and error,” he told the Bild tabloid. “If the infection rises, the liberalisation can be taken back.”

Back in Berlin, however, Germany’s cautious chancellor insisted that responsibility lies with her. She will take no chances with decisions that could see an infection spike that overwhelms the health system.

“I would be delighted to be the first to say everything is once again as it was, that things can start again,” she said. “But it’s my responsibility to say how things are. It’s not that I don’t think day and night about how things will be.”

When it comes, Germany’s exit plan will be staggered and regional, she said, reflecting the different infection rates around the country. Just as there is no vaccination for Covid-19, Dr Merkel added, there is no formula for restarting daily life and the economy.

“We have to go forward in steps and don’t know what the result will be,” she said. “Every time people are affected, people can die, doctors and nurses are afraid the hospitals will be overwhelmed.”