Running towards the bombs

The best weapons against terror bombing are the courage and humanity of local people. They were deployed in Omagh in 1998, in London in 2005 and in Boston this week 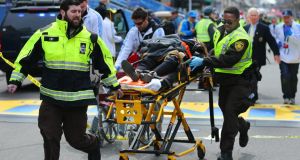 Fifteen years ago, on a summer’s day that didn’t feel like a summer’s day, my wife and I were walking with our young sons on the promenade in Bray. My boys loved Bray, the amusements, the sweets, the sea, the buzz.

I felt the vibration of my mobile. It was a police officer from Belfast whom I had known for a long time.

“You’ve got to get to Omagh,” he said, and his voice was so heavy and thick with emotion that I didn’t ask why.

I dropped my wife and sons back at our house in Dún Laoghaire, and three hours later I was walking around a war zone.

There were tears that day, as we counted the dead, and a sharp intake of breath when we found out that three generations of a family, including unborn twins, were among them.

The next day, I sat with what seemed like half the town as we waited to donate blood. Later, when I was getting ready to leave Omagh, I went up to an old friend, Joe Byrne. Joe was an SDLP councilor in Omagh for as long as I knew him, and usually all I wanted to talk to him about was GAA. For two days, all I talked to poor Joe about were his constituents who were dead or injured.

It was worse, of course, because we thought days like these had been consigned to the dustbin of history on a snowy Good Friday in Belfast just four months before. “Joe,” I said, putting my hand on his shoulder, “I don’t ever want to feel like this again.”

Seven years later, on a sultry day in July, I was standing at a roadblock in London, feeling like that again. I was looking at the Edgware Road tube station, the one I had used so many times when I moved to London from Dublin a few weeks after Omagh. The station looked like a tomb, and in some ways it was.

Later that day, I bumped into a London- Irish kid named Richard Whelan at King’s Cross. He was putting up flyers for his missing friend, Ciaran Cassidy. “Can you put this in the Boston Globe ?” he pleaded.

A few days later, they identified Cassidy’s body from the carnage at Russell Square, and the next time I saw Whelan he was sitting in St Mellitus Catholic Church, in Finsbury Park, at his friend’s funeral.

Joe Hayes eulogised their mate Ciaran with simple eloquence. “He didn’t care for politics or war but for his family, his friends, for his football and his weekend drink,” Hayes said. “He had no hatred.”

As if that wasn’t soul-crushing enough, a month later Whelan confronted a man who was throwing food at passengers on the top of a double-decker bus in north London. The man took umbrage and stabbed Whelan six times in the chest. He bled to death on the floor of the number 43, cradled by his sobbing girlfriend.

I called the priest who had said Cassidy’s funeral Mass, David Ardagh-Walker, as he was preparing to say Richard Whelan’s funeral Mass.

“It’s not right,” Fr David said, and I nodded and fought back tears as I wrote his quotes down.

Inspiration
As horribly sad as those days in Omagh and London were, they inspired another emotion: awe. The generosity and kindness of the people both of Omagh and of London, their resoluteness not to let the bombers win, are something I remember to this day even more than the horror and the crushing grief of funeral after funeral.

The courage and humanity of the first responders and emergency-service personnel in both Omagh and London was nothing short of inspiring.

I saw that all again this week, in Boston. But the feeling is even more profound because Boston is where I was born, and it is where I have made my home except for the years I lived in Ireland and England. Boston is my hometown.

The difference between this week and 1998 and 2005 is that I knew a lot of the first responders who ran towards the bombs at the finishing line of the Boston Marathon. And I knew some of the victims. And I, like thousands of Bostonians, will learn in the coming days that we knew even more of the victims, as they recover in hospital and their identities become more widely known.

I have written many times, including in this newspaper, that Boston is the most Irish city in the US. It is also the smallest big city in the US. And so on Tuesday evening, 27 hours after Boston became synonymous with terror, I followed my old friend Ed Kelly up the stairs at the District Four fire station in Boston’s South End. Kelly’s father was a firefighter, and my father was a firefighter, and the truth of the matter is that the vast majority of Boston firefighters have Irish surnames.

First responders
The District Four fire station houses two trucks, Engine Seven and Tower Ladder 17. My cousin’s kid, a young firefighter named Hayhurst, was sitting in the control room and greeted me and Kelly, whom everybody calls Edzo.

“Here’s the deal,” Ed said, stopping me before we went into the room upstairs. “They don’t want their names in the paper. They don’t want to be singled out. They did what every firefighter in the city did. What every cop, every EMS [emergency medical services] worker did. They don’t think they’re special.”

When we walked into the room, I recognised two firefighters immediately. I knew them. I knew one of them by name. And I knew that the one I knew by name, Seán, was friendly with the Richard family, which was devastated by the bombs on Boylston Street the day before.

The firefighters of Engine Seven were just around the corner when the first bomb went off. They raced to the scene and found an eerie silence, and the dead and the wounded scattered. Some had their clothes blown off. Some had their legs blown off.

Seán saw one of his friends from Dorchester, Bill Richard, standing there in shock. Bill and his wife, Denise, had brought their three children, nine-year-old Henry, eight-year-old Martin and six-year-old Jane, to watch the runners cross the finishing line across from Boston Public Library. It is a great family tradition, something done by thousands of families. They were standing in front of what police believe was a backpack containing a pressure cooker loaded with ball bearings and nails when it exploded.

Seán kneeled down over Martin, a beautiful boy who was always kind to Seán’s daughter, his third-grade classmate at the local charter school.

* This rugged firefighter, who is muscular and imposing, stopped to regain his composure. His lower lip quivered, and a tear fell from my eye and smudged my notebook.

By sheer luck, Bill and his son Henry avoided serious injury. But Denise was hit in the head with shrapnel, and little Jane, a talented Irish step dancer, lost part of her leg.

In fact, almost everyone on Engine Seven knew the Richards; the lieutenant’s kid was a classmate of one of the Richard kids, and the driver’s daughter babysat Martin.

One of those strangers was a shabbily dressed and clearly distressed homeless man, whose foot hung by a thin shred of flesh. “I looked him in the eye and asked him if he was okay,” another firefighter on Engine Seven, a hulking former marine who served three combat tours in Iraq and Afghanistan, told me. “But he was in shock. He couldn’t talk.”

The marine was treated for post-traumatic stress disorder after his last combat tour. I asked if he needed more treatment after what he just went through. He didn’t answer for a while, then nodded slowly and said, “Probably.”

Another former marine was on Tower Ladder 17, and when he jumped down from the truck and waded on to the bloodied sidewalk he had a Hobson’s choice: he saw two children, both of them missing legs. He instinctively grabbed one, and another firefighter grabbed the other. He and a paramedic from Boston Emergency Medical Services tried to put a tourniquet on the boy’s leg, but the blood made the tubing slippery. He tried to comfort the boy, who was terrified and in excruciating pain.

Ed, who works on Tower Ladder 17, was off duty and had brought his kids to watch his wife run the marathon. She had just crossed the finishing line and had walked down Boylston towards Berkeley when the first bomb went off. Kelly ran down Berkeley Street, burst into the station house, grabbed his gear and ran back to the scene.

“A lot of off-duty guys did the same. Not just firefighters. Cops, EMS,” Kelly said. “It says something about this city.”

Those first responders included race officials and ordinary bystanders. They tended to white people and black people and yellow people and brown people and they ripped their own clothes to fashion tourniquets.

The firefighters did this even as they expected more explosions, even as they assumed the bomber might have released some biological weapon.

I asked one of the firefighters why he and his brother firefighters did what they did, with no concern for their own safety. Why they ran towards the bombs. Why they were prepared to die if need be.

“That’s our job,” he said, shrugging.

As soon as he said that, the alarm rang. The firefighters bolted from the room and slid down the pole to Engine Seven and Tower Ladder 17, and then they were gone, into the night and whatever might await them.

And as they raced away amid the deafening sirens, I knew that whoever did this had failed, as surely as the bombers in Omagh and London had failed. Because whatever dark forces left those bombs in Omagh, London and Boston do not stand a chance when there are men and women who will run towards the bombs, to save strangers and neighbours alike.

Kevin Cullen is a columnist for the Boston Globe

* A sentence (“When I looked at young Marty,” Seán told me, “I knew he was gone.”) was removed from this article on June 18th 2018 on foot of the findings of a review commissioned by the Boston Globe into the journalist Kevin Cullen’s reporting on the Boston marathon bombing. The review found that a firefighter’s account of the identification of the body of a young boy, Martin Richard, as originally reported, was disputed by the firefighter, who said he knew the boy as Martin and would not have referred to him as “Marty”.