‘I will be more use to my movement free than behind bars,’ says Anna Gabriel 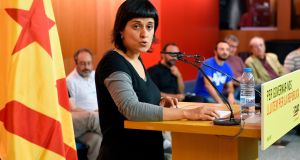 Anna Gabriel, a senior figure in the Popular Unity Candidacy party, said she would remain in Switzerland, claiming that the Spanish judiciary would treat her unfairly. Photograph: AFP/Getty Images

A leading Catalan pro-independence politician has said she will not return to Spain to face a supreme court summons, claiming that the country’s judiciary would treat her unfairly.

Anna Gabriel, a senior figure in the Popular Unity Candidacy (CUP), is due to appear before the supreme court in Madrid on Wednesday as part of an investigation into alleged sedition and rebellion by members of the independence movement. However, she has been in Switzerland in recent days and in an interview with that country’s Temps newspaper, she said she will not appear.

“Given that I will not be given a fair hearing in my own country, I have looked for a country that can protect my rights,” Ms Gabriel told the newspaper. The treatment of the Catalan independence movement, she said, was comparable to recent repression in Turkey.

“I will be more use to my movement free than behind bars,” she said. “When I saw the fate of a number of my colleagues who have been in prison since December, I realised I had to leave.”

Four Catalan independence leaders are in prison awaiting trial for their roles in last autumn’s secessionist drive, including Oriol Junqueras, the former vice-president of the region.

The anti-capitalist CUP has only four seats in the Catalan parliament. However, in the previous legislature the party’s support was crucial in ensuring a pro-independence majority and it has been the most radical secessionist force in the region’s mainstream politics in recent years.

Ms Gabriel also told media she is considering requesting asylum if Spain tries to extradite her.

The Socialist Party also criticised the move. “The key thing about making a political commitment is to defend it until the end and you don’t defend it by fleeing from justice,” said the party’s spokeswoman, Margarita Robles.

Ms Gabriel’s decision to evade the Spanish justice system follows a similar move by the ousted Catalan president, Carles Puigdemont. In October he went to Belgium where he has remained.

The choice of Switzerland, like Belgium, is believed to be significant. Differences between the legal systems of those countries and that of Spain are an obstacle to extradition on the sedition and rebellion charges that Mr Puigdemont and Ms Gabriel would face. In December, Spain dropped an international arrest warrant against Mr Puigdemont for technical reasons.

The former president has been campaigning to be reinstated, despite a constitutional court ruling preventing him from doing so. However, on Tuesday, the Catalan parliament’s presiding council delayed a decision on whether to table a motion changing the law in order to allow him to be sworn in from afar.

The deadlock caused by Mr Puigdemont’s attempt to become president has created division in the independence movement, with his own Together for Catalonia (JxCat) coalition at odds with the Catalan Republican Left (ERC) over who should lead a new regional government.

Another former Catalan president, Artur Mas, was questioned in the supreme court on Tuesday about his role in the independence drive. Mr Mas said he told the court that an October 1st independence referendum was “real” but that the declaration of independence that followed was only symbolic.