Catalan leader rails against EU as Spain rules out referendum 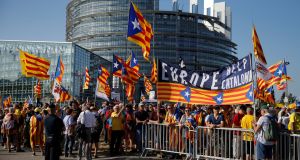 Supporters of Catalan independence protest outside the European Parliament in Strasbourg on Tuesday at the fact that three elected Catalan MEPs were not allowed to take their seats for its inaugural session. Photograph: Vincent Kessler/Reuters

Catalan nationalists have made a new call for Madrid to negotiate the holding of a referendum on independence for their region, amid frustrated attempts to win the EU over to their cause.

“We must agree on when, how and under what circumstances we will hold a referendum that puts an end to the conflict,” said Roger Torrent, speaker of the Catalan parliament, at a conference in Madrid on Thursday.

Calling for a “pact of clarity”, between the Spanish and Catalan governments, he said dialogue was needed between the two sides.

Mr Torrent represents the Republican Left of Catalonia (ERC), which governs the northeastern region in a coalition with the Catalan Democratic Party (PDeCAT).

Similar calls for a referendum contributed to the deterioration of relations between the Catalan government and the central administration of Pedro Sánchez’s Socialist Workers’ Party earlier this year, triggering a general election. Mr Sánchez’s government refused to discuss the holding of a vote on secession, arguing the constitution does not allow for it. Mr Sánchez has called an investiture vote for the end of July in the hope of forming a new Spanish government.

Foreign minister Josep Borrell responded to Mr Torrent’s appeal by again ruling out a referendum. “I don’t know how many times it has to be repeated,” Mr Borrell said. “There is no constitutional possibility of holding a referendum on secession from Spain. ”

Earlier this week, several thousand pro-independence activists demonstrated in Strasbourg in protest at the fact that three elected Catalan MEPs were not allowed to take their seats in the European Parliament’s inaugural session. Former Catalan president Carles Puigdemont and Toni Comín, a former regional minister, have been in self-imposed exile in Belgium, while Oriol Junqueras, the region’s former vice-president, is in jail awaiting sentencing after going on trial for rebellion.

Although the EU’s General Court is considering their complaint against the Spanish authorities’ decision to block them from taking their seats, it did not allow Mr Puigdemont and Mr Comín to take part in Tuesday’s session. The former Catalan president did not attend the Strasbourg demonstration due to fears that he would be arrested by French police.

However, he recorded a video message for his supporters in which he criticised the EU. “A Europe in which the good ones, the plural voices of people [...] do not have their rights guaranteed is not our Europe,” he said.

Mr Puigdemont’s remarks feed into a broader frustration felt by many pro-independence Catalans at what they feel is an unjustified refusal by the EU’s institutions and member states to acknowledge their right to self-determination.

They were further angered when Mr Borrell, an outspoken critic of Catalan nationalism, was nominated to be the new EU high representative for foreign affairs.

But some observers have warned that turning against the EU could be counterproductive for the independence movement.

“Two million people who have voted in favour of [pro-independence parties] may feel justifiably let down by the EU machine,” noted Catalan commentator Francesc-Marc Álvaro. “But it would be dangerous for them to join the ranks of Europhobia, a lair where the company is not very pleasant nor the rhetoric very inspiring.”