Catalan independence: what’s the story and what happens next? 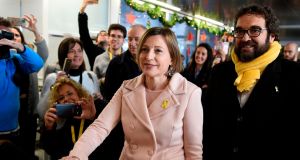 Carme Forcadell, the former speaker of the Catalan parliament, who has been jailed for over 11 years for sedition, casts her ballot in the Catalan regional election on December 21st, 2017. Photograph: Josep Lago/AFP via Getty Images

On Monday, Spain’s supreme court announced its verdict in the landmark trial of 12 Catalan leaders accused of rebellion, sedition and misuse of public funds over their roles in the failed push for regional independence two years ago.

Nine of them were cleared of violent rebellion but convicted of the lesser charges of sedition and misuse of public funds.

How has the independence movement evolved over recent years and why have some of its key figures ended up in the dock?

Why do some Catalans want independence?

There has been a growing clamour in the past decade for independence from those Catalans who believe their wealthy region has a moral, cultural and political right to self-determination, and that it has long put more into Spain economically than it has received in return.

But even though successive pro-independence Catalan governments have purported to speak for all Catalans, polls have consistently shown the region is evenly split on the independence issue.

Pro-independence parties have never managed to take 50 per cent of the vote in regional elections. Meanwhile, popular support for seceding from Spain – which reached a record high of 48.7 per cent in October 2017 – is currently at 44 per cent, with 48.3 per cent of Catalans in opposition.

Has independence always been a key issue in Catalan politics?

While some Catalans have long dreamed of independence, the issue has risen to the fore only in recent years. In 2010, support for secession hovered at about 20 per cent.

Calls for independence grew as Spain endured a painful and protracted economic crisis. Artur Mas, the then Catalan president, switched to supporting independence in 2011 at a time of widespread anger over his centre-right Convergence and Union (CiU) party’s austerity policies. Critics have accused him of a cynical manoeuvre to redirect that fury against the central government in Madrid.

Many people in the region were also angered by the Spanish constitutional court’s decision in 2010 to annul or reinterpret parts of the 2006 Catalan statute of autonomy, which would have afforded the region greater independence.

How have successive Catalan governments tried to achieve independence?

In short, by holding two referendums in contravention of Spain’s 1978 constitution, which is founded on the “indissoluble unity of the Spanish nation”.

In November 2014, Mas’s government held a symbolic, non-binding independence referendum in defiance of Spain’s constitutional court, which had ruled the vote illegal. More than 80 per cent of participants opted for independence, but only 2.3 million of Catalonia’s 5.4 million eligible voters took part. Mas was subsequently barred from holding public office for two years.

Three years later, the government of Mas’s successor, Carles Puigdemont, ignored warnings from the Spanish government and the country’s constitutional court and pushed ahead with a unilateral referendum.

Pro-independence parties managed to get a law for the referendum passed in the regional parliament in early September 2017, despite furious objections from opposition MPs, who said usual procedures had been disregarded. The law was eventually struck down by Spain’s constitutional court.

The Spanish government of the then prime minister, Mariano Rajoy, also insisted the vote would not go ahead and deployed thousands of police officers to Catalonia.

The poll, held on October 1st, 2017, was marred by violence after Spanish police used force to try to stop the referendum. According to the Catalan government, 90 per cent of participants opted for independence on a turnout of 42 per cent.

The police action made front-page news across the world, damaging Spain’s reputation, while the referendum plunged the country into the worst political and constitutional crisis since its return to democracy.

Puigdemont signed a declaration of independence nine days later but proposed its effects be suspended for two months to allow for dialogue. Pro-independence Catalan MPs nevertheless voted on October 27th ,2017, to unilaterally declare independence from Spain in a session boycotted by dozens of opposition MPs.

Less than an hour later, the Spanish senate approved the use of article 155 of the constitution, which allowed Rajoy’s government to assume direct rule of Catalonia, sack Puigdemont and his cabinet, and call a snap regional election.

Three Catalan pro-independence parties won 47.7 per cent of the vote and 70 seats in the 135-seat regional parliament at the election in December 2017. But the single biggest winner was the centre-right, pro-unionist Ciudadanos, which took 37 seats.

Direct rule was lifted in June 2018 when the new Catalan government was sworn in.

What was the legal fallout of the referendum?

Nine of the 12 defendants – include Cuixart, Sànchez, the former Catalan vice-president Oriol Junqueras and the former Catalan parliament speaker Carme Forcadell – were accused of rebellion, which could have carried a prison sentence of up to 25 years.

Puigdemont and three of his former cabinet ministers fled into self-imposed exile in Belgium before they could be arrested.

That’s the big question. The Catalan independence movement has always been characterised by its peaceful nature. The regional president, Quim Torra, has called on Catalans to greet guilty verdicts with “a huge show of non-violent civil disobedience”.

However, direct action – including the blocking of roads and railway lines – is expected from the so-called Committees for the Defence of the Republic.

In late September, police in Barcelona arrested nine people associated with the CDR who were allegedly planning to sabotage Catalan infrastructure. Seven of them have been remanded in custody and are accused of belonging to a terrorist organisation and possessing explosives.

Spain’s acting prime minister, Pedro Sánchez, has shown a more conciliatory approach to the independence issue than Rajoy, but has ruled out a referendum and stressed any negotiations will have to adhere to the constitution.

Sánchez has warned his caretaker government could apply article 155 if necessary, but he has also spoken of the need for coexistence in the region.

The independence movement, meanwhile, has lost momentum since the referendum. While Puigdemont, Torra and others favour maintaining the pressure on Madrid by following a unilateral path towards independence, Junqueras’s party, the Catalan Republican Left, is pushing for a less confrontational and more practical approach.

Regardless of the supreme court verdict, any answers to the Catalan question are likely to remain as elusive as ever. – Guardian

1 Explainer: Did the Taoiseach ignore public health rules by going on a picnic?
2 Miriam Lord: Leo’s Phoenix pecs just a storm in a bag of cans
3 Coronavirus: Need to move away from the ‘language of blame’ - Holohan says
4 University of Limerick head resigns over personal Covid-19 health concerns
5 Dig for remains of Red Hugh O’Donnell finds skull and coffins
Real news has value SUBSCRIBE