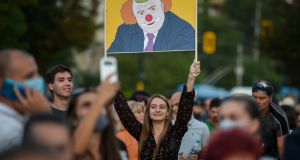 A woman holds a placard depicting Bulgarian prime minister Boyko Borisov as a clown during an anti-government protest in Sofia, on July 20th Photograph: AFP

Bulgaria’s embattled government has survived a no-confidence vote in parliament but still faces calls to resign from demonstrators who demand an end to corruption and impunity.

Hundreds of people massed outside parliament on Tuesday morning to denounce the cabinet of prime minister Boyko Borisov, and thousands were expected to protest later in central Sofia, as they have every evening for a fortnight.

Mr Borisov and his allies say they will listen to criticism and shake up the government, but they deny turning a blind eye to graft and are determined to retain power at least until elections scheduled for next spring.

Only 102 of Bulgaria’s 240 deputies backed a no-confidence motion that was brought by the opposition Socialists, who with Bulgarian president Rumen Radev are spearheading political efforts to unseat Mr Borisov’s centre-right cabinet.

“Every voice will be heard. Will there be changes? Yes. It is not enough to be better than the others. We need to be as good as the people want,” said deputy prime minister Tomislav Donchev, who described corruption as a “chronic disease” that had assailed Bulgaria long before Mr Borisov’s Gerb party took power in 2009.

“There is no point in having early elections in winter. The government still has a lot of work to do to deal with the health, social and economic consequences of the [coronavirus] epidemic” and make the best use of EU funding, he added.

“If there is something I regret, it is that there is no format at the moment for talks with the protesters. I would very much like to find one.”

Mr Borisov missed the vote due to the EU summit in Brussels, where he said he had secured a good deal for Bulgaria during talks on an economic recovery fund for the bloc and on its long-term budget.

“This is why I deserve calls to resign,” he said sarcastically.

“For those people who are demanding my resignation, I’m leaving you €29 billion for the coming years,” he added, referring to the amount he said Bulgaria would receive in EU funds between 2021-27.

Anger in the EU’s poorest state over the wealth and power of “oligarchs” ignited this month when state security officers – who are supposed to protect only top officials – roughly blocked opposition activists from a public beach near the villa of Ahmed Dogan, a retired party leader who is still believed to wield great influence.

Two senior advisers to Mr Radev were then detained in an investigation by the prosecutor general’s office, which critics accuse of being close to Mr Dogan.

Prosecutor general Ivan Geshev says the protests are backed by fugitive millionaire Vasil “The Skull” Bozhkov. About 30 of the gambling tycoon’s alleged associates were detained in raids in Sofia in the early hours of Tuesday.