UK welcome for oligarchs leaves it vulnerable to Russian influence 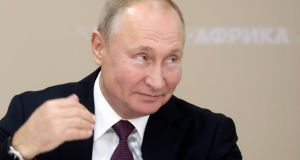 Russian president Vladimir Putin: the Intelligence and Security Committee’s report is a disturbing account of greed, neglect, cowardice and an astonishing lack of curiosity about a threat to democratic processes. Photograph: Sergei Chirikov

There was no smoking gun pointing to Russian interference in the Brexit referendum, no list of prominent names in receipt of Moscow gold and no Conservative donors identified as pals of Vladimir Putin.

But the Intelligence and Security Committee’s Russia report is nonetheless a disturbing account of greed, neglect, cowardice and an astonishing lack of curiosity about an established threat to democratic processes.

Nobody emerges well from the report – from Boris Johnson, who delayed its publication for political reasons, to his predecessors who welcomed Russian oligarchs to turn London into a laundromat for their looted wealth.

On the hottest political issue of Russian interference in the 2016 referendum, the committee says the government and security agencies have found no evidence of it – and they have not looked for any.

In the light of what it calls credible evidence that Moscow tried to influence the 2014 Scottish independence referendum and solid evidence of Russia’s responsibility for hacking Democratic National Committee emails ahead of the 2016 US presidential election, the committee’s call for a retrospective investigation into the EU referendum seems reasonable.

But in a response almost half as long as the report itself, Johnson’s government ruled out any such inquiry and MI5 has shown no appetite for investigating the matter either.

A central allegation in the report is that Britain took its eye off the ball as Putin’s Russia turned from a potential partner to an established threat, murdering its enemies on British soil as it pursued a more aggressive policy elsewhere.

The intelligence and security agencies can reasonably argue that a succession of Islamist terrorist attacks made counterterrorism a more pressing priority in recent years.

But Britain’s policy of welcoming oligarchs and their money to London has created an industry of “enablers” that makes the country more vulnerable to Russian influence than it might be otherwise.

“There is an obvious inherent tension between the government’s prosperity agenda and the need to protect national security. To a certain extent, this cannot be untangled and the priority now must be to mitigate the risk, and ensure that where hostile activity is uncovered, the proper tools exist to tackle it at source and to challenge the impunity of Putin-linked elites,” the report says.

There is a further tension, echoed in Britain’s new antagonism towards China, in the government’s determination to loosen ties with the rest of Europe and any ambition to put its Russian house in order.