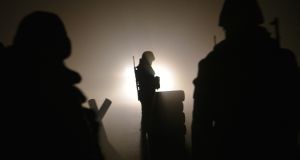 Armenian soldiers stationed at a checkpoint outside Agdam supervise the last vehicles leaving the region as the territory is due to be returned to Azerbaijan. Photograph: Getty

Azerbaijani president Ilham Aliyev has hailed a “new, glorious” page in his nation’s history after its troops moved into the first of several areas that Armenian forces must vacate after their defeat in six weeks of fighting over the disputed Nagorno-Karabakh region.

In a process overseen by Russian peacekeepers on Friday, Azeri soldiers and armoured vehicles entered the Agdam district, and are due to take control of Kalbajar district next Wednesday and the Lachin area by December 1st.

Armenian forces have held Nagorno-Karabakh and several adjoining areas of Azerbaijan, including Agdam, since a war in the early 1990s that saw the region’s ethnic Armenian majority break away from Baku’s control.

Azeri troops regained much of the territory in an offensive that began in late September and ended on November 10th with a deal signed by Armenia, Azerbaijan and Russia, which is deploying almost 2,000 troops to keep the peace.

“We are writing a new, glorious history of our people, our country,” said Mr Aliyev in an address to his nation.

“Dear people of Agdam – you are no longer displaced people. You will return to your native lands.”

Agdam was the largest town that Azerbaijan lost during vicious fighting for Nagorno-Karabakh three decades ago. Its population of about 40,000 Azeris fled as Armenian forces seized it in 1993, after which it suffered widespread looting and major destruction and was left abandoned.

In other areas that Azerbaijan will retake in the coming days, many Armenians have been packing their belongings and harvesting their fruit before leaving for Armenia. Some have razed their houses to the ground rather than contemplate Azeris moving into them.

Nonetheless, Russian peacekeepers say more than 4,000 Armenians have returned in recent days to Stepanakert, the regional capital, and nearby areas of Nagorno-Karabakh that are still under de facto separatist control.

Azerbaijan’s recent military success – thanks in part to high-tech weapons and other support from close ally Turkey – was greeted with jubilation in a country that has struggled to support hundreds of thousands of people displaced by the 1990s conflict.

In Armenia, by stark contrast, the peace deal and concessions made by Yerevan caused widespread despair and sparked angry street protests and a political crisis. The country’s president has joined opposition leaders in urging the government to step down and allow snap elections, and last weekend several people were arrested over an alleged plot to assassinate prime minister Nikol Pashinyan.

Several senior Armenian officials have resigned or been sacked during the turmoil, including defence minister Davit Tonoyan on Friday and foreign minister Zohrab Mnatsakanyan earlier this week.

Anti-government protests continue in Yerevan but Mr Pashinyan has refused to resign. He is expected to meet Russia’s foreign minister Sergei Lavrov and defence minister Sergei Shoigu when they visit Armenia on Saturday. The two Moscow officials are then expected to fly east to Baku.