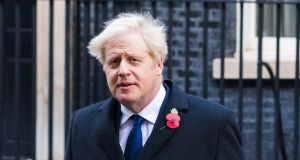 Boris Johnson: by disparaging devolution he has fuelled accusations that he is indifferent to the will of the Scottish people. Photograph: Vickie Flores/EPA

When Boris Johnson blurted out to a group of Conservative MPs that devolution in Scotland had been a disaster and “Tony Blair’s biggest mistake” he won himself 24 hours of bad news, condemnation and awkward clarification. But if Johnson made a gaffe it was within American journalist Michael Kinsley’s definition of it as “when a politician tells the truth, some obvious truth he isn’t supposed to say”.

With polls showing a steady majority for independence and the Scottish National Party (SNP) on course for a majority in next year’s Holyrood elections after 14 years in power, devolution has not delivered what unionists like Blair anticipated. He hoped the new Scottish parliament would choke off enthusiasm for independence and that the system of proportional representation would ensure that the SNP would never govern alone.

But if Johnson’s idle musing was truthful from his perspective, it was also a blunder that will come back to haunt him next year when Scottish independence is likely to replace Brexit as Britain’s major constitutional issue.

If the SNP does win a majority in next May’s elections, Nicola Sturgeon will claim a mandate for a second independence referendum which requires the approval of Westminster to be legally binding.

Johnson has said repeatedly that he will refuse any such request but by disparaging devolution he has fuelled accusations that he is indifferent to the will of the people of Scotland. He is already under fire over the Internal Market Bill, which (apart from reneging on the Brexit withdrawal agreement) repatriates to London some powers from the devolved administrations.

The prime minister’s unpopularity north of the border means that other pro-union parties such as Labour and the Liberal Democrats would be reluctant to campaign with him if there is a referendum. His remarks on devolution have made such co-operation even more unlikely.

The storm over Scottish devolution has caused Johnson to stumble as he seeks to reset his administration after the departure of senior aides Dominic Cummings and Lee Cain. It will blow over but it serves as a reminder of the two biggest threats to the success of his relaunched government: Scotland and himself.

No amount of levelling up, cheering up or smartening up in Downing Street will save his premiership from disaster if he presides over the break-up of the union. And even if he hires the wisest counsellors and the most competent cabinet, Johnson will remain vulnerable to his own deficiencies as a leader which have been so cruelly shown in recent months.