Uber loses its licence to operate in London

The firm has faced criticism from unions, lawmakers and traditional black cab drivers over working conditions 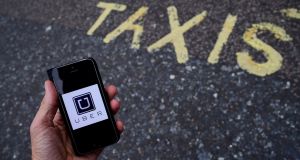 London’s transport regulator on Friday stripped Uber of its licence to operate from the end of the month. Photograph: Reuters/Toby Melville

London’s transport regulator on Friday stripped Uber of its licence to operate from the end of the month, affecting over 40,000 drivers in a huge blow to the taxi app.

“TfL considers that Uber’s approach and conduct demonstrate a lack of corporate responsibility in relation to a number of issues which have potential public safety and security implications,” Transport for London said on Friday. These include its approach to reporting serious criminal offences and how it carries out background checks on its drivers.

The final day of Uber’s licence will be on September 30th. Uber was given just a four-month temporary licence in May.

In London, the firm has faced criticism from unions, lawmakers and traditional black cab drivers over working conditions. Uber has the right to appeal the decision within twenty one days.

Mayor of London Sadiq Khan said in a statement: “I want London to be at the forefront of innovation and new technology and to be a natural home for exciting new companies that help Londoners by providing a better and more affordable service.

TfL has today informed Uber that it will not be issued with a private hire operator licence. pic.twitter.com/nlYD0ny2qo

Providing an innovative service must not be at the expense of Londoners safety. My response to @TfL's Uber decision. https://t.co/iEUal9VLU3 pic.twitter.com/B9V0mEKrWr

“However, all companies in London must play by the rules and adhere to the high standards we expect — particularly when it comes to the safety of customers. Providing an innovative service must not be at the expense of customer safety and security.

“I fully support TfL’s decision — it would be wrong if TfL continued to license Uber if there is any way that this could pose a threat to Londoners’ safety and security.

“Any operator of private hire services in London needs to play by the rules.”

Labour MP Wes Streeting, chairman of the All Party Parliamentary Group on Taxis, said: “This is a courageous decision by the Mayor and Transport for London, finally drawing a line in the sand to make it clear that no company, however big and powerful, will be allowed to flout our laws and regulations or jeopardise Londoners’ safety without facing serious consequences.”

“Uber has not shown itself to be a fit and proper operator. It stands accused by the police of failing to properly handle serious allegations of rape and sexual assault of passengers.

“It had to be dragged through the courts to recognise its responsibility to provide even the most basic rights and protections to Uber drivers. Its business model is based on saturating London’s taxi and private hire market to drive its competition off the road.

“That’s why major cities across North America and Europe have already banned Uber from operating on their roads.”