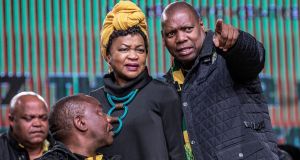 Fears that South Africa’s ruling party could split after its elective conference in December has propelled a “compromise” candidate into contention to be the party’s next president.

Since the beginning of the year, African National Congress deputy president Cyril Ramaphosa and former health and foreign affairs minister Nkosazana Dlamini-Zuma have been the favourites to take over as leader of the former liberation movement.

However, continuous infighting across the ANC’s provincial structures between supporters of both candidates has recently helped the chances of the party’s treasurer-general, Zweli Mkhize, of taking the top job.

It is hoped that if he can assemble a broadly acceptable leadership group to contest the ANC’s top six positions, he can unify the different warring factions, and avoid a damaging split in the movement ahead of the 2019 general election.

Ramaphosa’s camp is seen as “reformist”, and it has been promising to tackle endemic corruption and cronyism in the party if he is elected ANC president. Those in the ANC who back Dlamini-Zuma – President Jacob Zuma’s ex-wife and his preferred candidate – espouse a more “traditionalist” ethos.

As the months have passed, campaigning by both camps in the nine provinces has become increasingly confrontational and bitter due to their ideological differences. This has left a number of the ruling party’s provincial leadership structures either paralysed or in disarray.

Last week a high court in KwaZulu-Natal declared the ANC’s 2015 provincial elective conference there to be “unlawful and void”. That disputed election had voted in a group of leaders loyal to Zuma, the current ANC president.

The party infighting in Zuma’s home province is particularly bad because of the region’s importance to the outcome of the national election. KwaZulu-Natal has the most ANC branches in the country, and these structures vote in the party’s new leadership at national level.

The ANC’s national executive committee, its highest decision-making body, is set to decide on Friday whether its sidelined leadership in KwaZulu-Natal can appeal the high court ruling to the supreme court of appeal.

A similar situation has arisen in the Eastern Cape, where ANC members in the province’s biggest region, OR Tambo, are going to court to try to nullify the outcomes of its 2015 elective conference.

If these party members are successful, the ANC’s provincial elections in the Eastern Cape scheduled for later this month may be postponed.

“Otherwise we are running the risk of appeals being a function of factional mobilisation,” he said on Monday.

Mkhize, who is from KwaZulu-Natal, is seen as a candidate who can bridge the divide between the main factions vying to control the ANC: he is not tarnished by allegations of corruption, has support among both urban and rural ANC members, and is seen as independent of both cliques.

Late last month he confirmed he was willing to contest the ANC’s presidential election if nominated by party branches. Since then the ANC in Mpumalanga Province has reportedly backed him for the position.

The Institute of Security Studies’ programme head for elections, Jakkie Cilliers, believes there is a real danger the ANC will split after the elective conference, with the Ramaphosa faction the more likely to walk away if it does not win the poll.

“I think Ramaphosa has put too much into this campaign to stand aside now and back Mkhize, even for the sake of party unity. Also, compromise candidates have been promoted in past elections and they have not won,” he said.

He added: “But this will all come down to the wire, and we won’t know until the conference who the ANC branch representatives will nominate [for the top six jobs] and how they will vote.”