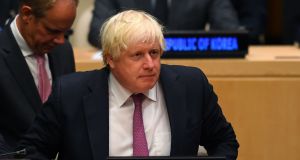 It is tempting to view each of Boris Johnson’s actions through the prism of his personal ambition and selfishness, the two great animating forces of his life in politics. They no doubt played a role in his latest return to the limelight but his 4,000-word essay on Brexit has helped to reveal a profound split in Theresa May’s government over Britain’s future outside the European Union.

But she also appeared to downgrade her speech in Florence next Friday from a keenly anticipated articulation of her vision for Brexit to an “update” on how the negotiations are going.

May is expected to offer to make payments into the EU budget in return for something close to the status quo on single market access and the status quo for a transitional period after Brexit. Most of her ministers favour that approach and the Brexiteers in the cabinet, including Johnson, can live with it, as long as the payments are not too high and the transition period not too long.

The division, within the cabinet and the Conservative Party, is over what should happen next. All sides agree that Britain should not seek membership of the European Economic Area (EEA) like Norway, because that would mean allowing free movement of people as the price of full participation in the single market.

Some ministers, led by chancellor of the exchequer Philip Hammond and influenced by the views of British business, want to mimic EEA membership from the outside by shadowing EU regulations and adopting judgments set by the European Court of Justice.

Brexiteers like Johnson and environment secretary Michael Gove fear that such an arrangement would be the worst of both worlds, relegating Britain to the role of a “rule-taker” from the EU with no influence. They favour a free trade deal similar to Ceta, the agreement between the EU and Canada, but with extra elements, such as free trade in services.

In reviving the fraudulent claim that leaving the EU would free up £350 million a week to spend on the National Health Service, Johnson is restoring a note of optimism to Brexit. When Conservatives meet in Manchester in two weeks, the foreign secretary’s joyful bluster could strike an appealing contrast to the prime minister’s anxious hedging.