Varadkar to press for ‘soft Brexit’ in talks with Theresa May

British prime minister Theresa May has called for a 'seamless border' between Ireland and the UK as she meets with Taoiseach Leo Varadkar in London. Video: Reuters 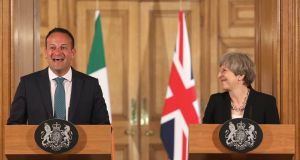 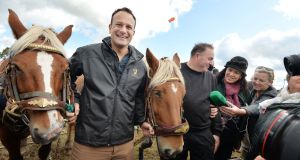 Taoiseach Leo Varadkar will hold detailed one-on-one discussions with British prime minister Theresa May over the next five days in a bid to secure a “soft” Brexit and protect Irish interests.

Mr Varadkar said he would speak to Ms May by telephone on Thursday night ahead of her major speech setting out her government’s Brexit strategy, which she will deliver in Florence tomorrow.

Mr Varadkar also said at his meeting with her in Downing Street on Monday he will strongly emphasise the fundamental importance of free trade between both countries.

“I am hoping we will see some progress signalled in her speech tomorrow, some indication we are moving towards an orderly Brexit and particularly a soft Brexit, one that minimises the damage to the Irish economy,” he said.

Mr Varadkar was speaking at the Ploughing Championship in Screggan, Co Offaly where he was making his second visit but his first since becoming Taoiseach.

The Taoiseach also made his strongest rejection to date of a standalone Brexit Minister saying the person in the post would have “nobody to meet”.

Mr Varadkar said on Thursday the appointment of such Minister - called for by all the major Opposition parties - did not make sense.

“A Brexit minister would have nobody to meet and I don’t think that would be a very useful exercise frankly,” he said.

He also said Minister for Foreign Affairs Simon Coveney had been given specific responsibility for Brexit in Cabinet.

At a media conference at the site, Mr Varadkar spoke of his meeting with Guy Verhofstadt, the European Parliament’s chief Brexit negotiator and his comments that the EU would not allow Ireland to suffer.

Mr Varadkar said: I was very much assured that the EU parliament’s position is aligned with that of the Irish Government and the EU 27.

“We were very much speaking the same language. One of the objectives we have in these negotiations is to continue to have free trade north and south, and between Britain and Ireland and that is really important for the agrifood sector.

“About 40 per cent of our exports go to Britain. I was looking at it today and was fascinated to learn something that I didn’t know before and that is there is almost as much trade going the other way.

“We might sell €5 billion in agrifood produce to Britain. They sell about €4 billion to us.

“One of the things I will be saying to prime minster May when I meet her on Monday is to the advantage of both countries that we maintain free trade.”

Asked to respond to comments made by EU Agriculture Commissioner Phil Hogan that Britain’s foreign secretary Boris Johnston was out of kilter with his ministerial colleagues, Mr Varadkar said: “I think it’s probably the case in many governments and many political parties that there are differences in opinion between Cabinet members.

“I don’t think it will help Ireland’s cause to comment on that.”

Asked about his own assessment of his first 100 days as Taoiseach, Mr Varadkar said: “It’s been a very busy 100 days. I’m proud of a few thing s we have done. We have increased the minimum wage for the fourth time.

“We have a new public sector pay deal that means that 90 per cent of public servants will have their pay fully restored by 2020.

“We took the decision to hire another 900 special needs assistants to give young children with disabilities an opportunity that otherwise they would not get.

“We have overseen the creation of 15,000 new jobs and housed about 6,000 individuals and their families.