Queues of trucks have congested motorways near the northern French city of Calais, mainland Europe's main gateway to the United Kingdom, with the approach of the Brexit date. 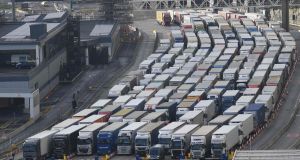 Fisheries have proved to be the final stumbling block as negotiators try to conclude the final phase of talks on trade relations between the EU and UK after Brexit.

As member states wrestled with how much they were prepared to compromise with London, long queues of trucks built up at British ports, with stockpiling by companies expecting disruption compounding the pressures of Christmas and Covid-19.

Early on Friday, chief EU negotiator Michel Barnier said the talks were in their “last crucial hours”, ahead of an impending Sunday deadline set by the European Parliament. But as the day drew to a close, sources close to the negotiations said hours of wrangling had failed to bridge the gap between the two sides, and it was still uncertain whether there would be a deal.

British prime minister Boris Johnson called on the EU to produce a new offer, insisting his country was prepared to enter a no-deal scenario in less than two weeks’ time, meaning tariffs and other barriers to trade that are forecast to threaten at least tens of thousands of jobs on both sides.

“Our door is open. We’ll keep talking. But I have to say that things are looking difficult. And there’s a gap that needs to be bridged . . . We’ve done a lot to try and help, and we hope that our EU friends will see sense and come to the table with something themselves,” Mr Johnson told reporters.

“If that doesn’t happen then come January 1st we will be trading on [World Trade Organisation] terms. An event that obviously has been 4½ years in the making, 4½ years in the preparation. Yes it may be difficult at first, but this country will prosper mightily, as I’ve said many, many times, on any terms and under any arrangement.”

Eight member states with significant fishing interests have balked at Britain’s demand to revoke most of the roughly €650 million in fish caught by EU boats in its territorial waters and decide access in annual negotiations. The two sides remain far apart, with the EU offering to cede up to 18 per cent of its share of fish caught in British waters, while Britain is insisting it give up at least 60 per cent.

A British bid for separate treatment of bottom-feeding or demersal stocks like white fish, and pelagic species which swim higher in the sea such as mackerel, is seen by the EU side as a bid to divide member states by pitting the interests of France and Belgium against those of Ireland, Spain, and Denmark.

Mr Barnier said a “main hurdle” in the talks was the EU’s desire to have the power to retaliate if London cuts off the access of EU fleets to its waters in the future, by placing barriers on fish imports from the UK.

MEPs have warned it will not be possible to ratify a deal in time for it to come into force on January 1st if it arrives any later than Sunday, while the British side has also warned that it will stop negotiating once time runs out for a deal to be in place by the end of the year.

If talks fail, the EU views it as inevitable that negotiations will have to resume in the future, given the sides’ close economic ties, albeit after significant damage to their economies and to relations between the two sides.

“It’s the moment of truth. We have very little time remaining, just a few hours . . . If we want this agreement to enter into force on the 1st of January,” Mr Barnier said. “There is a chance of getting an agreement, but the path to such an agreement is very narrow.”