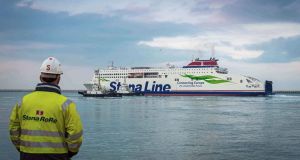 Iarnród Eireann said the new Stena service would give Irish industry ‘an increasingly important freight link between Ireland and Europe’. .

In a further signal of changes to trade driven by the UK’s impending departure from EU economic rules, the Swedish company is adding another vessel to the direct route to France.

Fears about traffic snarl-ups at UK and EU ports on the Irish Sea and English Channel has led to an increase in the direct ferries to continental Europe, and a new direct service to France.

The number of services on Stena’s ferry route from the south-eastern port to France will increase from three to six, as a result of an additional ferry being assigned.

The increased service follows the decision of Danish ferry operator DFDS last month to re-enter the Irish market with a new, six times a week service between Rosslare and Dunkirk.

Rosslare Europort, which is operated by Iarnród Eireann, will have up to 30 direct services to and from Europe next year.

As the closest Irish port to mainland Europe, it has become an attractive to Irish importers and exporters looking to avoid uncertainty from Brexit controls on the UK “landbridge” route.

If the shipping lines meet traffic targets, Rosslare Europort will see a 40 to 50 per cent increase in freight traffic through the port.

Stena is adding a freight-only vessel, Stena Foreteller, providing an additional 3,000 lane metres of freight capacity per trip with facilities for up to 12 driver-accompanied units.

Iarnród Eireann said that the new Stena service would give Irish industry “an increasingly important freight link between Ireland and Europe”.

Glenn Carr, general manager of Rosslare Europe, said that the new route and services from the port would “ensure that Irish business has Brexit-proof options for trade”.

“In the context of Brexit, our new business announcements have illustrated the work we have done with the haulage industry, representative bodies, shipping operators and ports in Europe to identify strong offerings for the sector,” he said.

Stena chief executive Niclas Mårtensson said the company had been “listening carefully to feedback from our customers and it has become clear that there is demand for increased frequency on the Rosslare-Cherbourg service, the shortest direct crossing between Ireland and France”.

In addition to the Cherbourg service, Stena Line, the largest ferry company running services between Ireland and Britain, operates five routes with 11 ships on the Irish Sea: Belfast to Cairnryan, Heysham and Liverpool, Dublin to Holyhead, and Rosslare to Fishguard.

The UK landbridge is still the quickest route to Europe for hauliers with journeys as short as 13 hours, compared with 18 hours on the ferry to Cherbourg and up to 24 hours to Dunkirk.

Uncertainty around post-Brexit controls coming into effect from the start of next year at EU-UK border ports make the journey unpredictable, when businesses require certainty on deliveries for time-sensitive products such as fresh and chilled food and pharmaceuticals.

On Tuesday, Stena called on the European Union to introduce a six-month “implementation phase” for post-Brexit controls at ports because many businesses were not ready, and because of the importance of the UK “landbridge” for Irish, British and European supply chains.

Brittany Ferries also operates direct services to continental Europe from Rosslare. The company sails to Bilbao in Spain twice each week, and will sail to Cherbourg once a week from March.