Pence and his wife are vaccinated live on TV 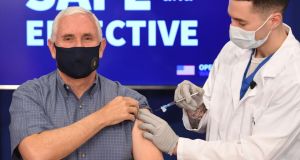 US vice-president Mike Pence claimed the country was “rounding the corner” on coronavirus, despite rising infection rates, as he received the Pfizer Covid vaccine live on television on Friday.

Mr Pence and his wife, Karen, became the first high-profile figures to receive the vaccine, at an event in the White House complex. “I didn’t feel a thing,” he said as he was administered his first dose.

Noting that Christmas was the season of hope, he declared “hope is on the way”.

“We’re on track, here in the United States, to administer millions of doses to the American people in less than one year. It is a miracle,” he said.

Though he cautioned that Americans still had a role to play in curbing the virus, he added: “We’ve never been more prepared to combat coronavirus than we are today. And even while we see cases rising and hospitalisations rising and heartbreaking losses, we’ll continue to marshal the resources that we have secured as a nation.”

He was speaking as the Food and Drug Administration (FDA) was poised to authorise a second vaccine, developed by Moderna, for emergency use.

There are no indications that president Donald Trump will be vaccinated publicly as he approaches his final month in office following his defeat in the presidential election.

Mr Trump, who was admitted to hospital and treated for Covid-19 in October, has made few public comments about the efficacy of vaccines, though he has claimed credit for the swift development of the Pfizer and Moderna products.

President-elect Joe Biden, who is 78, is expected to be vaccinated next week, while House of Representatives speaker Nancy Pelosi (80) and Senate majority leader Mitch McConnell (78) have said they will receive the vaccine in the coming days.

Mr Pence was administered the vaccine as the US’s coronavirus numbers continued to rise. More than 300,000 people have died from Covid-19 in the United States since the pandemic began, while more than 17 million cases have been recorded.

In California, infection rates have been on the rise in recent days, particularly in the Los Angeles area. The state of California has said it has just 3 per cent availability of its intensive care beds. Congress was edging towards agreement on a $900 billion (€490 billion) relief package on Friday, ahead of a midnight deadline.

Mr Biden, who will assume the presidency on January 20th, had no public events scheduled on Friday. He attended Mass at his local church to mark the 48th anniversary of the death of his first wife, Neila, and infant daughter, Naomi. His sons, Hunter and Beau, were injured in the 1972 car accident.

Meanwhile, in a potential boost to Mr Trump’s efforts to exclude undocumented immigrants from the census count, the supreme court dismissed a legal challenge to the plan. The court said the lawsuit was premature, but added it was expressing no view on “the merits of the constitutional and related statutory claims presented”.

The president’s proposal is particularly significant as it relates to the tabulations used to apportion seats in the House of Representatives.

The US constitution states that the apportionment should be based on “the whole number of persons in each state”, and makes no mention of citizenship. Any move to exclude undocumented immigrants would likely reduce the number of seats held by states like Texas, Florida, and particularly California, the most populous in the country.

More than six weeks since the US presidential election, Mr Trump continued to make baseless allegations about election fraud on Twitter on Thursday. “Governor Brian Kemp of Georgia still has not called a Special Session. So easy to do, why is he not doing it? It will give us the State. MUST ACT NOW,” he tweeted, reiterating calls for Georgia’s Republican governor to convene the state legislature to reassess the results of the election in the state, even though the Electoral College this week confirmed Mr Biden’s victory in Georgia and elsewhere.

Mr Trump is expected to issue more pardons as early as this weekend as he enters the final weeks of his presidency. He has already pardoned his first national security adviser Mike Flynn, who pleaded guilty to lying to the FBI. Mr Flynn in recent days has reiterated his calls for the military to “rerun” the election in swing states.