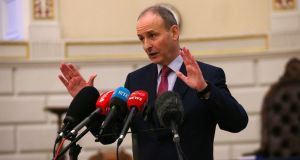 Micheál Martin didn’t even try to sound optimistic when opposition TDs wondered where we were at now in this crucial, last-gasp phase of the Brexit negotiations. Photograph: Laura Hutton

There was some good news from Brussels at lunchtime.

A couple of political heavyweights – the UK’s Michael Gove and EU commissioner Maros Sefcovic – got stuck into talks on Tuesday morning and by lunchtime agreement was reached on the thorny issue of post-Brexit arrangements for the Border.

Offending clauses in Westminster’s controversial Internal Markets Bill were ditched, and it seemed like the beginning of a positive push towards reaching a workable Brexit divorce settlement between the two sides.

But if the mood of pessimism around clinching a deal eased somewhat with agreement on the Northern Ireland protocol, it didn’t last. Just in case people were getting their hopes up, the Taoiseach was on hand to remind everyone that these discussions were different from the ongoing negotiations on a post-Brexit trade deal, which are still deadlocked.

Micheál Martin didn’t even try to sound optimistic when opposition TDs wondered where we were at now in this crucial, last-gasp phase of the process. In the Dáil on Tuesday, there a sense of time being marked by leaders and spokespeople as Brexit reaches endgame.

Could a last-minute compromise be hammered out or will the UK crash out without a deal?

Cian O’Callaghan of the Social Democrats called for an urgent Dáil debate this week on the issue, which is far too serious to ignore. He was supported in this by rural Independent Mattie McGrath. He pointed out that the Dáil rises for the Christmas break and we really should tease out what the plans will be after the negotiations conclude.

The Taoiseach wanted to oblige them, but he couldn’t. There simply isn’t enough time now.

He explained he has to fly out to Brussels on Wednesday for the European Council meetings on Thursday and Friday.

There is always next week, isn’t there?

If he were a builder pricing a job, this is the point where Micheál would have narrowed his eyes and sucked the air through his teeth, slowing shaking his head.

Mattie had asked for a Friday sitting but, with the best will in the world, there was no way the Taoiseach could manage that. He explained that he has to take a good run at the European Council for the rest of the week and sure then, where will we be with everything else that’s going on?

“I do have to alert the House to the fact that we could be very well discussing preparations for a no-deal Brexit” by the time the next available Dáil sitting comes around on Tuesday, he cautioned.

And even in the event of a deal – “if there was a deal” – we are still facing a significant degree of disruption, he added, sounding exceptionally downbeat.

But what about the good news from Gove and Sefcovic about the Border and trading arrangements for Northern Ireland to avoid a hard border on the island?

“I would caution that we should not over-interpret what are welcome moves by the UK government in relation to the protocol and the withdrawal treaty,” said the Taoiseach, throwing a bucket of cold water over the little sparks of hope raised earlier.

Positive and welcome though that agreement is, it is merely “a strand of the talks” to do with Northern Ireland.

The Taoiseach moved to dampen expectation even further. The Border is one thing, but the “future trading relationship is much more difficult, and will be very difficult, it seems to me, to resolve,” he said, offering little comfort as the clock runs down on Brexit.

A no deal would bring “unacceptable disruption” to ordinary people, workers and businesses. Micheál told the Dáil that he has expressed this view to “all who would listen to me” in Europe. He also said the same to Boris Johnson.

“He knows my view that common sense should prevail.”

Not that Johnson gives a fiddler’s fart for what Micheál might think. But you never know.

And so, like the Taoiseach, TDs keep their powder dry and await the outcome.

Meanwhile, the world keeps turning and we think of the Minister for Justice, who has had a fairly torrid few weeks on the political front, but altogether much better news on the personal front. Helen McEntee announced at the weekend that she is expecting her first child. But nothing is straightforward in Kildare Street, and her happy announcement served as a reminder that TDs are not entitled to maternity leave. It’s a constitutional thing.

The Meath East deputy is the first Cabinet Minister to become pregnant while in office since Fianna Fáil political powerhouse Máire Goeghegan-Quinn had her second child in 1979. But MGQ was a minister of state at the time. And an astonishing four decades have passed in national politics before it happened again.

If there was maternity leave for public representatives, there would be more women making decisions in public life, Holly reasoned

Holly Cairns of the Social Democrats had a few things to say about the news that McEntee is expecting during her party’s weekly press briefing on the plinth. It was refreshing to hear a TD from a rival organisation being so sensible and normal about a colleague.

“First of all, I’d like to congratulate her. And, you know, there’s an expression that you have to see it to be it, and she always stood out to me in Irish politics – a young woman. And she’s leading the way again being,you know, hopefully the first Cabinet Minister to give birth at Cabinet, and it’s great to see that.”

Hopefully not actually at Cabinet, Holly, although it might not do any harm to remind all the lads about the facts of life, as they pertain to political life.

“It’s mad that she’s the first member of Cabinet to give birth while in office,” said the TD for Cork South-West. “It’s even madder that there isn’t any provisions for maternity leave.” Women who stay home after having a baby have to put in a sick cert.

It wasn’t just mad, she said, but “ridiculous” that we’re even talking about such a thing in this day and age. If there was maternity leave for public representatives, there would be more women making decisions in public life, she reasoned.

And then, to show she meant business, Holly offered on the spot to “pair” with McEntee whenever she was required to vote in the Dáil, thus ruling out the need for her to attend divisions in Leinster House, and leaving her free to stay at home with her baby.

After every election, people wonder why there are so few women returned to the Dáil. Holly Cairns pointed out to the Taoiseach earlier this year that his own party managed to get just five women TDs elected this year and, out of 160 TDs, 36 are women.

So everyone scratches their head and wonders what to do about this when there is this “obvious glaring barrier” around maternity leave.

Holly, who is preparing a Bill, wants to work cross-party on improving the situation. Fine Gael’s Jennifer Carroll McNeill is also proposing legislation, while Fianna Fáil’s Niamh Smyth and Anne Rabbitte have also been active in this area.

All women, of course.