Co-productions with UK should survive, but free movement vital, says film board 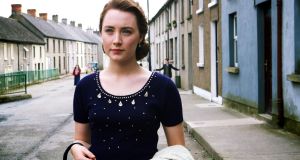 Long Brexit road ahead: Saoirse Ronan in ‘Brooklyn’ (2015), a co-production between Ireland, the UK and Canada (one of which is not in the EU). Photograph: Kerry Brown / Twentieth Century Fox

Currency fluctuations were in focus for the Irish film industry long before Brexit. At the Irish Film Board, one of the less obvious tasks for chief executive James Hickey is keeping a regular eye on exchange rates and how they might affect inward investment.

“It continues to be something we have to monitor,” says Hickey. When sterling weakens against both the dollar and the euro, as it has done over the past 12 months, it brings “both competition and a benefit” to the industry here.

The decline of sterling against the dollar has made it cheaper for Hollywood to make blockbusters in the UK, which may not do any short-term harm to London’s status as the third-busiest city for film production behind Los Angeles and New York.

In the past, high levels of production in the UK have been good for the Irish industry, as the international producers working in that market have been drawn to explore opportunities in Ireland.

And despite the plunge in the pound since last year’s referendum, Ireland remains competitive as an audiovisual production location, says Hickey. “London, even with [a weak] sterling, is still relatively expensive.”

But with productions often located on both sides of the Border, as well as in Britain and Ireland, any tightening of the Common Travel Area between the Republic, the North and Britain would be harmful to the audiovisual industry, he adds.

“It would obviously be vitally important for us to keep the Common Travel Area and, as far as possible, the free movement of goods and services,” says Hickey. “The biggest challenge for us would be a hard Brexit.”

However, a hard Brexit wouldn’t necessarily spell the end of the close co-operation on funding and production between the Irish film industry and its “great supporters” in the UK: Lenny Abrahamson’s Room and Frank were backed by Film 4, for example, while BBC Films and the British Film Institute were among the financiers of Brooklyn.

Canada was the third country involved in both Room (which was shot in Toronto) and Brooklyn, and indeed Hickey notes that Ireland’s healthy co-production relationship with Canada suggests the Irish industry can continue to maintain its links with Britain after it leaves the European Union.

Ireland’s co-production treaty with the UK is not governed by the EU, but by the European Convention on Cinematograph Co-production, which falls under the “promotion of culture” remit of the Council of Europe.

“But I don’t want to understate the difficulties that a hard Border will present, both for the film industry and for wider Ireland Inc,” he says.

The UK’s indigenous audiovisual production industry, and its wider creative sector, was overwhelmingly against Brexit before the referendum and for more modestly sized businesses, in particular, the “Leave” result is something of a scary movie. Among the independent sector’s list of concerns is the prospect of losing access to funding from Creative Europe, which is an EU programme with an annual budget of almost €1.5 billion.

British filmmakers say Brexit threatens to unspool their relationships with financiers and distributors across Europe, while uncertainty about the future of freedom of movement may prevent some productions being green-lit – the lead times for film projects typically exceed two years, the period of the UK’s exit talks.

In the wake of the referendum, there were two Brexit-related plot twists for the industry: Brendan O’Carroll said a sequel to the profitable Mrs Brown’s Boys D’Movie, a British-backed film shot in Ireland, had been delayed due to the weak sterling. Game of Thrones, meanwhile, was declared safe, with US television network HBO pointing out that the Northern Ireland Screen funding it receives to make the fantasy drama in Belfast’s Titanic Studios comes from Invest NI, rather than the EU’s European Regional Development Fund.

Game of Thrones will wrap next year anyway, and whether or not one of HBO’s planned spin-offs is based in the region may prove an interesting Brexit test case.

But, right now, as the television news cameras turn to the Berlaymont in Brussels, the audiovisual production industry is sitting in a semi-darkened cinema waiting for the opening credits to Brexit proper, not knowing what kind of drama it will be.