Speaking as Brexit negotiations get underway, Britain's Secretary of State for Foreign Affairs, Boris Johnson, has said that he thinks any deal can bring 'profit and honour for both sides.' Video: EU Council 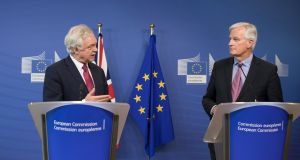 David Davis (left) and Michel Barnier at the start of talks this morning. Photograph: Jasper Juinen/Bloomberg

A year after the UK voted to leave the EU, the UK’s Brexit secretary David Davis arrived in Brussels formally to launch the negotiations on Monday.

Mr Davis was met by his main interlocutor the EU’s chief negotiator Michel Barnier and their two teams went straight in to what are expected to be day-long talks here in the EU Commission’s HQ, the Berlaymont.

Mr Barnier told waiting journalists that the talks today would focus on outlining and agreeing the priorities, including citizens’ rights for those left in each other’s territory after Brexit, financial commitments by the UK, and the issue of borders, particularly in Ireland.

Mr Davis insisted that he came in a positive frame of mind to create a “new deep partnership with the EU”.

“More unites us than divides us”, he said, promising to do a deal that will “benefit all citizens.”

“I want to reiterate at the outset of these talks that the UK will remain a committed partner and ally of our friends across the Continent.”

Mr Davis described the talks as the “most complicated negotiation of all time”. British prime minister Theresa May’s government is already on the backfoot. An attempt to strengthen her hand by calling an election backfired and she has been forced into doing a deal with the Democratic Unionist Party, talks on which are ongoing.

British chancellor Philip Hammond has warned failing to secure a Brexit deal would be “very, very bad” for the country and insisted there must be transitional arrangements to avoid a “cliff edge”.

Mr Davis is accompanied by a nine-strong negotiating team that includes the most senior civil servants at the department as well as officials from the Treasury and Home Office as well as Mark Sedwill, the national security adviser to the prime minister.

Meanwhile, the DUP’s Ian Paisley jnr, MP for North Antrim, said his party wants out of the customs union.

“You can’t be half-pregnant. We are either in or out of the EU,” he said. “Issues about the Border are a distinct issue that can be resolved if will is there to do it and in spite of all the gibberish about the problems associated with it, the will is there to ensure the Border works for trade.”

Taoiseach Leo Varadkar is meeting British prime minister Theresa May in London this afternoon and tell her Brexit must not adversely affect the “rights and freedoms” of Irish citizens.

Mr Varadkar’s first visit to the UK as Taoiseach coincides with the commencement of the negotiations in Brussels as well as the resumption of talks in Belfast between Northern Ireland’s political parties aimed at restoring the Stormont Executive.