Berlin attack suspect was on watchlist over links to radicals 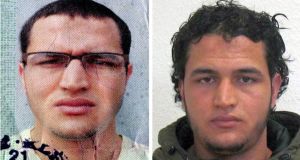 An undated handout made available by German Federal Criminal Police Office shows suspect Anis Amri who is searched for in connection to Monday’s terror attack in Berlin. Photograph: EPA/BKA

Germany is offering a €100,000 reward for information leading to the arrest of Anis Amri, a 24-year-old Tunisian national suspected of involvement in Monday’s Christmas market attack in Berlin which killed 12.

German authorities on Wednesday took the unusual step of issuing a Europe-wide arrest warrant for the man, who is believed to be armed and dangerous, after finding ID papers belonging to him in the cabin of the truck used in Monday’s attack.

The man arrived in Germany via Italy at the end of last year but, because his identity could not be confirmed, he was refused asylum. Registered under several aliases in several cities, he was placed on a police watchlist because of links to a radical preacher arrested last month and accused of recruiting young men for Islamic State.

Amri’s deportation was delayed because he lacked a passport and because Tunisia disputed he was their citizen. Though he was viewed as a security threat, and had been observed by authorities for a time, the man disappeared last month.

“This is a suspect, not necessarily the perpetrator,” he said.

Berlin pathologists expect to complete by Thursday the identification of all 12 victims of the crash. Most of those who died are believed to be German nationals, although a 31-year-old Italian woman, Fabrizia di Lorenzo, and an Israeli woman, Dalia Elkayamare, are also feared to be among the dead.

“My visit is symbolic for all the millions of people who have shared in the fate of the victims and of those who are fighting for their lives,” he said.

City authorities in Berlin on Wednesday removed the last traces of the Breitscheidplatz market huts flattened by the crash on Monday before it reopens on Thursday.

Crowds have returned to Berlin’s other markets, which reopened with added security measures after a one-day closure on Tuesday.

“We thought about staying away,” said Tobias Neuendorfer (22), “but decided not to let the terror ruin the mood.”