Armed patrols sent to many of Germany’s other 2,500 Christmas markets 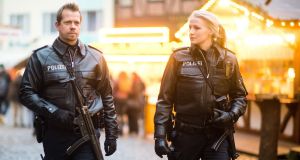 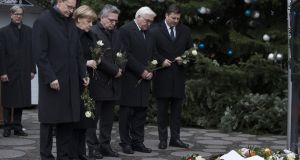 Berlin police have denied that lax security in the German capital allowed an articulated lorry to crash, unimpeded, into a Christmas market on Monday evening, killing 12 and leaving 48 injured.

Amid ongoing uncertainty over the perpetrator of the attack, Berlin’s police chief expressed doubt that concrete barriers along the Breitscheidplatz market’s perimeter could have prevented the attack.

“There are so many possibilities to kill people with a lorry,” said Klaus Kandt, Berlin’s police chief at a press conference. “Putting up concrete blocks would not completely eliminate the risk.”

At popular markets in the eastern cities of Dresden and Leipzig, and in western Germany’s Stuttgart and Göttingen, police cars and concrete barriers were placed around the perimeter and approach roads.

It was a similar scene around the world, as Christmas market operators from Manchester to Chicago announced increased security measures in response to the Berlin attack. While many Christmas markets in Germany are well-protected from traffic, the western Berlin market struck on Monday is an exception. It occupies a large traffic island where the demolished nave of the pre-war Kaiser Wilhelm memorial church once stood. It is surrounded on two sides by busy, multi-lane streets, with no bollards between the pavement and the street.

Security expert Peter Neumann said that, while there were no perfect security measures, it was possible to take simple, unobtrusive yet effective steps. “I’m a little surprised that natural barriers or concrete bollards haven’t been put up around German Christmas markets,” he said. “We’ve known about the danger to Christmas markets for some time.”

The security postmortem after the Berlin attack has divided opinion in Germany’s ruling Christian Democratic Union (CDU), reviving revived critical debate about Chancellor Angela Merkel’s open-door refugee policy last year. Finance minister Wolfgang Schäuble, an increasingly vocal of that strategy, said he was “not shocked at all” by the attack.

“We always said it would hit us, said Dr Schäuble. “Yesterday was not the last time.”

Klaus Bouillon, CDU head of the association of state interior ministers, said Germany was “in a state of war” and demanded tougher security measures at all levels of German life. But Clemens Binniger, a CDU interior spokesman in the Bundestag, said such calls were inappropriate and premature.

“For me the priority is not whether bollards would have prevented this,” said Mr Binninger. “Such security measures will be taken but are pointless now for the families of the victims.”

“We owe it to the victims and the whole population that we think again about our complete immigration and security politics,” said Horst Seehofer, Bavarian governor and CSU leader. After introducing 24-hour border checks on the motorways from Austria, Mr Seehofer has insisted he will pull out of a decades-old co-operation with the CDU after next year’s federal election unless Dr Merkel gives up her opposition to immigration quotas.

In Berlin, amid asylum seeker concern of reprisals from the attack, immigrant, refugee and Muslim organisations groups were quick to condemn Monday’s events.

“Terror has once again shown its ugly face,” said Erol Pürlü, head of the Muslim Co-ordination Conference. “It doesn’t shy away from innocent people and what is holy to them.”