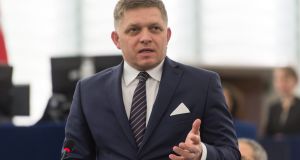 Slovakia’s prime minister Robert Fico: “A migrant who arrived in Germany and got refugee status . . . is now interrogated as a suspect for this heinous crime.” Photograph: Patrick Seeger/EPA

Central European states have ramped up security after Monday night’s truck attack on a Christmas market in Berlin, and several leaders reiterated their fears that the recent influx of migrants poses a grave threat to continental security.

A Pakistani migrant was reportedly arrested after 12 people were killed and 48 injured in the attack in the German capital, but prosecutors said they were not sure if he was the driver of the truck and that the perpetrator may still be at large.

“The facts are simple: a migrant who arrived in Germany and got refugee status . . . is now interrogated as a suspect responsible for this heinous, repugnant crime,” said Slovakian prime minister Robert Fico.

“I think that the cup of patience is beginning to spill over and Europe’s public will rightfully expect rather stronger [anti-migration] measures.”

Under Mr Fico’s populist government, Slovakia has been a staunch opponent of German-led plans to distribute refugees around European Union states, following the arrival in 2015 of more than one million asylum seekers, mostly to Germany.

Mr Fico said earlier this year that Slovakia would accept a small number of Christian refugees but did not want Muslims “who would like to start building mosques all over our land and trying to change the nature, culture and values of the state”.

The president of neighbouring Czech Republic, Milos Zeman, is one of the most scathing critics of a liberal immigration policy and claims Muslim refugees would seek to impose Sharia law and help Islamic State group expand into Europe.

“As for the horrifying crime in Berlin, the president regrets to say that it confirms his warning about terrorist attacks,” said Mr Zeman’s spokesman, Jiri Ovcacek.

“It is now apparent that the [tighter] security measures that have been introduced at Prague Castle are important and well founded. Terrorist attacks are coming closer to the Czech Republic.”

Along with Slovakia, Hungary has launched legal action to block an EU programme to relocate 160,000 refugees around the bloc and ease pressure on “front-line” states Greece and Italy. Barely 8,000 people included in the plan have actually been resettled in Europe.

“Yesterday it was not only the citizens of Berlin, but the whole of Europe and our shared Christian values that took a blow,” Hungarian prime minister Viktor Orban wrote in a letter of condolence to German chancellor Angela Merkel.

The flow of asylum seekers through the Balkans slowed to a relative trickle when the region closed its borders to them in March, but migrants are still trying to reach western Europe with people smugglers.

On Saturday, Croatian police found 67 Afghans and Pakistanis crammed into a van with British number plates. More than 40 of them required medical treatment for carbon monoxide poisoning, and two Bulgarians were arrested.

Alexandar Vulin, Serbia’s minister for social affairs, said on Tuesday that his country sought to register all migrants who crossed its territory, but said “it is absolutely impossible to know these people’s intentions or history”.