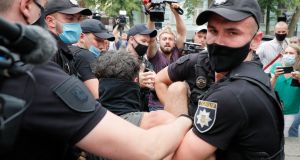 Belarusian police beat and detained peaceful protesters for a second successive night as anger over a disputed election brought thousands of people onto the streets to demand the resignation of autocratic president Alexander Lukashenko.

Despite disruption to internet access in Belarus, locals uploaded footage on Monday evening of crowds gathering in the capital, Minsk, and other towns and cities, of drivers blocking roads, honking horns and waving flags in support of the opposition movement, and police setting upon unarmed protesters with batons.

Police also fired rubber bullets, tear gas and flash grenades, as they did on Sunday during protests that injured dozens of people and led to about 3,000 being detained around the country following its presidential election.

Chief opposition candidate Svetlana Tikhanovskaya lodged a formal complaint over the election on Monday, after official results gave her just 10 per cent of votes against 80 per cent for Mr Lukashenko, ruler of Belarus since 1994.

“Of course we don’t recognise these results,” said the former teacher, who decided to run for president when her husband, an opposition blogger, was jailed.

“We are for peaceful change, and the authorities should think about how to hand over power peacefully,” added Ms Tikhanovskaya, who sent her children abroad for their own protection during the election campaign.

Her ally, Maria Kolesnikova, urged Belarusians to defend their votes.

“We call on those people who feel their victory was cynically stolen not to be silent. We call on the security forces not to go against your own people,” she said.

“The story of a new Belarus is only just beginning.”

Belarus’s KGB security service claimed to have uncovered a plot to kill Ms Tikhanovskaya and, amid confused reports that she may have been detained on Monday evening, Lithuania’s foreign minister Linas Linkevicius said he was “concerned about her safety” because her whereabouts were “not known even to her staff”.

Mr Lukashenko (65) said he had no intention of resigning, claimed that protesters were being led astray by foreign “puppet masters” and warned: “The [police] response will be appropriate. We won’t allow the country to be torn apart.”

The White House said it was “deeply concerned” by events in Belarus, and neighbouring Poland called for an emergency European Union summit on the crisis.

European Council president Charles Michel told Minsk that “violence against protesters is not the answer”, while the Kremlin congratulated Mr Lukashenko on the election results and called for closer co-operation between Russia and Belarus.