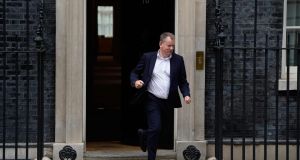 Boris Johnson’s decision to give MPs a vote before he breaks international law by reneging on the Brexit withdrawal agreement should be enough to spare him a substantial backbench rebellion next week. But it will do nothing to reassure the European Union if the UK internal market Bill becomes law.

The concession means that the EU will have to put its trust in the Conservative-controlled House of Commons rather than the Conservative government that Johnson will not use the revolver he has placed on the negotiating table.

Despite London’s piratic actions, negotiations between Michel Barnier and David Frost continue, as does the work of the joint committee tasked with implementing the Northern Ireland protocol. Last week’s special meeting of the committee was attended by Frost, Michael Gove and paymaster general Penny Mordaunt on the British side and Barnier and commission vice-president Maros Sevcovic for the EU.

Barnier asked the British why, if they cared so deeply about issues like food supplies from Great Britain to Northern Ireland and export declarations for goods moving in the other direction, they were choosing to politicise them. It is a good question, not least because none of the disputes Johnson has used to justify reneging on the withdrawal agreement are especially intractable.

The question of whether to list Britain as a safe third country to export food into the EU is an autonomous one for Brussels – one it makes unilaterally. But the commission has made clear that Britain simply has to give details of its food safety regime from January 1st onwards to make it onto the list.

The issue of export declarations is not one for the joint committee but is part of Britain’s obligation to apply the EU customs code to Northern Ireland. Switzerland, which is not in the EU customs union, is exempt from such declarations because it has a customs security agreement with the EU. There is no reason why Britain could not negotiate one too.

Finally, the issue of state aid is entangled in the trade agreement negotiations, where Britain’s resistance to publishing its subsidy regime and details about its domestic regulation is the main obstacle to progress.

The UK internal market Bill is unlikely to make much progress in the House of Lords before the EU summit on October 15th, giving the two sides ample time to resolve their differences and for Johnson to remove the offending clauses.