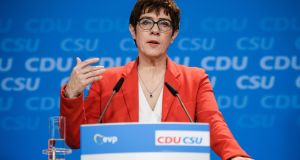 Tensions are growing between France and Germany – and in Berlin’s coalition government – over a ban by Germany on arms exports to Saudi Arabia.

France is furious that the ban on German companies has impacted on its more liberal business relationship with the Saudi kingdom, and has undermined a weeks-old treaty between Paris and Berlin allowing for greater defence co-operation.

Last January in Aachen, French president Emmanuel Macron and German chancellor Angela Merkel signed a new treaty which, among other things, promised “the closet possible co-operation between their arms industries on the basis of mutual trust”.

“Both countries,” the agreement continued, “will develop, through common projects, a common approach to arms exports.”

Many saw tensions ahead, given Germany’s more restrictive arms export rules – a nod to its fascist past. Those tensions have arisen even faster than the pessimists predicted, in light of the Saudi export ban imposed by Berlin last November after the murder of journalist Jamal Khashoggi.

Dr Merkel’s Christian Democratic Union (CDU) planned to let that ban expire automatically at the weekend, until its coalition ally, the Social Democratic Party (SPD), intervened to demand an extension. To underscore its argument the SPD points to a more general 2018 coalition agreement that bans arms exports to countries involved in wars.

As long as Saudi Arabia is engaged in the war in Yemen, SPD leader Andrea Nahles argues, “no German weapons exports can go there”.

But this is no longer just about German weapons. For months French and British officials – and executives in Airbus and elsewhere – have said the German ban has hit their own projects in the interconnected arms industry.

Without even tiny German parts, from sealants to ball bearings, their helicopters or boats cannot be delivered.

This week France’s otherwise mild-mannered ambassador to Berlin, Anne-Marie Descôtes, reminded German politicians that its domestic political squabbles had “serious consequences for our bilateral co-operation in in the defence area”.

CDU leader Annegret Kramp-Karrenbauer acknowledged this week that, with strict arms export rules and even stricter interpretation, “Germany is not very credible at the moment” in defence policy and was “making common European projects practically impossible”.

“If one wants European security and defence policy, then one has to agree European rules, and it will not be possible to have them as strict as the German rules,” she said. “That has to be accepted.”

Her officials accuse the SPD of holier-than-thou games to boost its European election profile.

Despite a Yemen war dating back to 2015, its coalition export restriction was no hindrance to trade worth €400 million with Saudi Arabia and its partners involved in the conflict. Of this around 64 per cent went directly to Saudi Arabia – before November’s ban.

CDU officials insist the coalition agreement only bans exports to countries “directly” involved. The SPD insists that, with an estimated 100 Saudi warplanes involved in Yemen, Riyadh meets the definition. As the weekend deadline looms, Germany’s arms export war drags on.