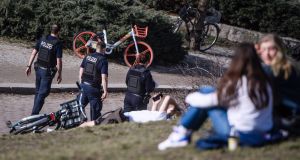 Germany’s debate on how best to tackle Covid-19 is shifting as Denmark and Austria loosen their restrictions while new border checks loom on the border with France.

These moves come amid growing expectations that chancellor Angela Merkel and regional leaders will roll back lockdown measures next week, even though coronavirus cases are rising again after a brief plateau.

Official data on Thursday showed nearly 1,700 more cases than a week ago in Germany, though the daily death rate is down more than a third compared with a week ago.

The rapid spread of virus mutations has prompted Germany to in effect seal its borders with the Czech Republic and Austria, allowing only limited commuter and cargo traffic.

Now it is the turn of France, whose eastern Moselle region has become a hot spot for South African and Brazilian variants of the virus.

Officially the border will remain open, but from next Monday all arrivals in one country from the other will require a negative PCR test. France will accept a test up to three days old; Germany wants a result from within the previous 48 hours. Commuters on both sides will be exempted from the test requirement.

Police on both sides of the border have agreed to step up their monitoring of traffic, while the French government has promised increased testing, screening and vaccination in Moselle.

Further north, Denmark has conceded it is taking a calculated gamble with a partial reopening of the country from next Monday despite a slow rise in case numbers.

Following recommendations of an expert group, Danish schools will be allowed reopen in some areas at 50 per cent capacity, with students attending on alternate weeks. Students aged 12 and over, along with teachers, will be asked to test twice weekly.

Smaller shops selling clothes and furniture will be allowed to reopen from Monday, once they are not in shopping centres, and with strict capacity restrictions. Outdoor gatherings – including cultural and sporting activities – will be allowed with a 25-person limit and, in some cases, recent negative tests.

“There are several elements of uncertainty in the calculations – we’ve presented that openly,” said Danish health minister Magnus Heunicke. “Should it turn out that there is room for further opening, we will be ready to discuss this with the other parties.”

Travel restrictions into the country remain, requiring a negative test no more than 24 hours old, although additional restrictions for UK arrivals have been lifted.

Arrivals from neighbouring countries, excluding commuters, must present a valid reason for their journey and a negative test.

Perhaps the greatest pressure on Germany is coming from Austria, nearly three weeks after it loosened its lockdown restrictions. Currently its incidence rate is running at 137 per 100,000 of population, more than twice the German rate of 61.7.

Chancellor Sebastian Kurz said his government had decided to move its focus beyond incidence rates alone in favour of greater testing, to give citizens back a greater sense of freedom in their daily lives.

“We had simply reached a point where the lockdown was losing its power, fewer people participated and thus it made no sense, at least in Austria, to extend the lockdown indefinitely,” he told Germany’s Bild tabloid. “With the openings we now have an upward trend, but this has flattened out somewhat and it is slower than, for example, in Ireland and Portugal, where the numbers rose explosively.”

Her shift came as German police raided the Bundestag office of Georg Nüsslein, deputy floor leader of the Christian Social Union (CSU). His parliamentary immunity was lifted amid claims he accepted bribes over the procurement of protective masks.