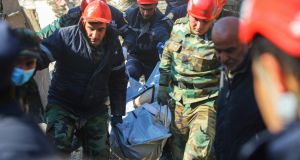 Armenian and Azerbaijani forces have accused each other of continuing to shell residential areas in and around the disputed region of Nagorno-Karabakh, in contravention of a ceasefire brokered by Russia.

More than 450 people have been killed and thousands displaced by fighting that began two weeks ago over the mountainous region in the south Caucasus, which is inside Azerbaijan’s internationally recognised borders but has been run by its ethnic Armenian majority since war in the 1990s.

After some 11 hours of talks in Moscow, Azeri and Armenian diplomats agreed that a truce should begin at noon on Saturday to allow prisoners and the bodies of fallen soldiers to be exchanged. Minutes after hostilities were supposed to stop, however, both sides reported renewed attacks by the enemy.

Azerbaijan said an apartment block in its second city of Ganja was hit by Armenian artillery fire on Sunday, killing at least nine civilians and injuring more than 30 others. Nagorno-Karabakh’s ethnic Armenian administration denied responsibility, and accused Baku’s forces of shelling the region’s main city, Stepanakert.

Russian foreign minister Sergey Lavrov discussed the conflict with Turkish counterpart Mevlüt Cavusoglu on Sunday and, according to Moscow, they “noted the essential need to strictly fulfil all the provisions” of the ceasefire deal.

The failure of the agreement would cast doubt on Russia’s ability to decisively influence the actions of two ex-Soviet states with which it has sought to maintain good ties, as Turkey raises its profile in the strategic region and pledges to do whatever necessary to help its close ally Azerbaijan.

Azerbaijan’s autocratic president, Ilham Aliyev, said Russia had a “special role” to play in resolving the conflict and had “a lot of tools to quickly convince Armenia that the only way out of this situation . . . is to find a solution with Azerbaijan.” Moscow supplies arms and energy to Armenia and has a military base on its territory.

“The active and clear position of the Turkish leadership . . . essentially prevented third countries intervening in this conflict, so I believe the role of Turkey is extremely positive, and it should play an even greater role in our region and in settling the conflict,” he added.

Mr Aliyev also told Russia’s RBK news outlet that – through negotiation or military action – Azerbaijan was ready to “go to the end. We haven’t stopped . . . Our goal remains unchanged: the restoration of Azerbaijan’s territorial integrity.”

Russia and France have joined Armenia in denouncing the arrival of pro-Turkish fighters from Syria to bolster Azeri ranks, while the EU and Iran – which borders Azerbaijan and Armenia – have warned of the danger of a wider, regional conflict.

“The humanitarian ceasefire between Armenia and Azerbaijan is an essential step towards de-escalation,” European Council president Charles Michel tweeted on Sunday. “Negotiations without pre-conditions must resume without delay.”