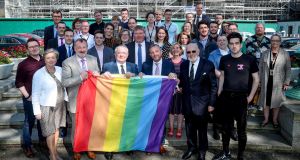 The Pride flag will fly over Leinster House for the first time after TDs, party members and staff met as part of a new Oireachtas LGBT+ support group today.

A coffee morning was hosted by Ceann Comhairle Sean Ó Fearghaíl as part of plans to establish the new group.

“The purpose of this morning’s meeting was to promote a discussion among members and staff of the Houses of the Oireachtas as to how the LGBT+ group within Leinster House can be managed and brought forward over the coming weeks,” said Mr Ó Fearghaíl.

Fine Gael Senator Jerry Buttimer requested that the group should be set up to provide a space for LGBT+ members and staff in Leinster House.

“By flying the flag over Leinster House on Saturday, we are showing our commitment to support and assist the LGBT+ community and their allies in the Oireachtas, be they members, political staff or support staff,” said Mr Ó Fearghaíl.

Dublin Pride started on June 20th and culminates with the main event – the Dublin Pride Parade at 1pm on Saturday.

This year’s theme is Rainbow Revolution and promises to be the biggest, most colourful yet.