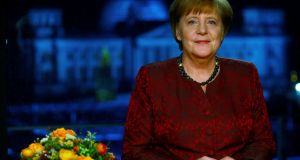 Angela Merkel’s televised address to start her 13th new year in power was her unluckiest yet. As acting chancellor, the German leader has entered her fourth consecutive month of political limbo.

With no progress to report on a new government, she used her speech to flag fears of a “growing rift” in Germany, between those who see their country as strong and successful and those with concerns of being swamped by immigrants or excluded from society.

“These are the two realities of our country ... and both of them motivate me,” she said.

It was a well-timed observation: despite steady economic performance and a record low jobless rate, a representative survey in Tuesday’s Welt daily found just a third of Germans (36 per cent) were optimistic about the future, down from 51 per cent in 2014.

She has no government yet but, in her televised address, Dr Merkel said a priority for her fourth term would be to rebalance the social market economy, Germany’s postwar model of tying economic success to social cohesion.

Warning that “the world will not wait” for a new German government, she left out how Europe was waiting, increasingly impatiently, for Berlin politicians to get their act together.

The first attempt of German politicians – who have been on a full pay go-slow since September 24th – at forming a new coalition government collapsed in November.

Given the time this is all taking, you could be forgiven for thinking Dr Merkel is planning a moon landing, not reviving her old coalition between her centre-right Christian Democratic Union (CDU), the more right-wing Christian Social Union (CSU) and the centre-left Social Democratic Party (SPD).

Struggling to find a political common denominator, the three parties are circling each other like traumatised dogs after their worst electoral kicking since 1949.

Fearful that theirs will be perceived as a coalition of political losers, not winners, the megaphone diplomacy and mood music are now at full volume.

Singing lead this week is the CSU, Dr Merkel’s loud Bavarian allies, who are spooked by the far-right AfD and increasingly populist liberal Free Democrats (FDP) and have watched with interest the rise to power of Sebastian Kurz in neighbouring Austria.

For that reason the Bavarians are determined to frame their traditional January 6th meeting as a political epiphany back to their conservative roots. Leading party figures started the new year flying reliable political kites of tighter immigration controls and expedited deportations of criminal refugees.

Their latest motivation: an Afghan refugee who arrived last year and is accused of stabbing his teenage ex-girlfriend. He claimed to be 15 but, given doubts about his age, CSU interior minister Joachim Hermann has demanded the introduction of medical tests to check if asylum seekers are claiming to be under-age to avoid deportation.

Such tests – of bone development and condition of teeth – have been dismissed as “unethical and unreliable” by Germany’s medical association.

But many see a link between political demands for age tests, already commonplace in Austria, and the Bundestag debut of the Alternative für Deutschland (AfD).

Anxious not to be outdone by the CSU this week, AfD deputy leader Beatrix von Storch faces investigation for incitement – and was suspended from Twitter – after a derogatory post about Muslim men.

Without mentioning the AfD by name, as is her wont, Dr Merkel used her new year address to call on people to show “more consideration of others” in public discussions.

But after a dozen dominant years, her influence is diminishing: just 47 per cent of Germans quizzed for a YouGov poll want her to serve a full term.

Given their mixed fortunes, the first whispers in Berlin are that, in coalition talks, Merkel and Schulz will agree to elope together to Brussels next year as the next European Commission president and German commissioner respectively.