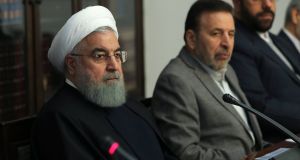 Iran’s president Hassan Rouhani: the protests should not be viewed as a threat but as an opportunity. Photograph: Iran’s presidential official website/EPA

The protests sweeping across Iran sparked by a demonstration in Mashhad against rising prices and unemployment have been transformed into a broad challenge to the 39-year-old clerical regime, backfiring against conservatives who organised the original demonstration.

Their aim had been to undermine President Hassan Rouhani by capitalising on resentment over the failure of the easing of sanctions under the Iran nuclear deal to produce early benefits for the poor and middle classes. Resentment has spiked due to a rise in fuel prices, cuts in subsidies, and a clampdown on informal banks serving millions of depositors.

In response to the Mashhad demonstrations, which spilled over into the country’s religious capital, Qom, Rouhani’s vice-president, Eshaq Jahangiri, warned conservatives they “should know that the smoke from their actions will go into their own eyes. When street movements begin, others will ride [them], and those who start [them] will not end [them].”

While the demonstrations have economic woes at their core, participants have a host of other motivations: anger over rampant corruption, social repression, growing inequality, animosity against the economic power of military firms and clerical bodies, and Iran’s involvement in conflicts in Iraq and Syria. A few young women have torn off headscarves in defiance of conservative dictates.

Chants reflect these diverse motivations. Some condemn rising prices, others call for an end to clerical rule and the downfall of supreme leader Ayatollah Ali Khamenei, a capital offence. He has accused external enemies of encouraging and arming protesters.

It is significant that no identifiable leaders have emerged, protests have not been organised, and rallies have not, so far, had massive support in the country’s main cities, Tehran and Tabriz.

Instead, protests have taken place in provincial cities and towns where millions of Iranians are angry over years of neglect and a lack of investment in basic services, as well as roads and schools. Consequently, protests have been scattered rather than concentrated in the chief population centres as was the case in 2009 in the mass rallies against the re-election of ultra-conservative president Mahmoud Ahmadinejad.

Furthermore, the protesters have been limited in numbers. The vast majority are youngsters who have no stake in the regime and no individual, group or party they can call upon to solve their problems.

In spite of violence and fatalities, Rouhani – fearing large-scale demonstrations in Tehran and other major cities – has taken the view that Iranians may protest peacefully. If the protests remain contained, he could exploit popular dissatisfaction in order to tackle conservative opponents who have obstructed his reform programme.

However, to mollify protesters Rouhani will have to translate post-nuclear deal successes – such as a dramatic reduction in inflation and an economic growth rate of 6 per cent – into tangible benefits for Iranians across the country.