‘We are not afraid’: Major crowds at Barcelona anti-terror rally

22 of over 120 wounded in August 17th-18th attacks still in hospital, with six critical 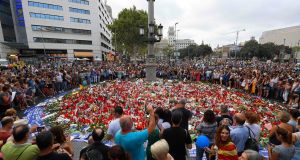 People place placards and candles in honour of victims of the Barcelona and Cambrils terror attacks on the Las Ramblas boulevard in Barcelona on August 26th, during a march against terrorism. Photograph: Lluis Gene/AFP/Getty Images

Tens of thousands of people have joined an anti-violence march in Barcelona on Saturday protesting at last week’s terror attacks, in which 15 people died.

At the end of the march, famed Catalan actor Rosa Maria Sarda and Muslim activist Miriam Hatibi read short speeches and poems from a stage in the city’s main central square.

Ms Sarda said: “We are not afraid because the behaviour of our fellow citizens has shown a society of solidarity.”

Ms Hatibi replied: “We are not afraid” - repeating the march’s slogan that thousands then shouted back in Catalan - “because we know that love triumphs over hatred.”

Medical authorities said on Saturday that 22 of the more than 120 wounded in the August 17th-18th attacks are still in hospital. Six of them remain in a critical condition.

The Islamic State group claimed the attacks in Barcelona and Cambrils that used vehicles and knives - Spain’s deadliest in more than a decade.

Eight suspects are dead, two are in jail under preliminary charges and two more remain under investigation.

Spain’s central, regional and local authorities are trying to send an image of unity by walking behind the emergency workers. In a first for a Spanish monarch, King Felipe VI joined the demonstration.

The slogan of the march - “I’m not afraid” in the local Catalan language - has grown from a spontaneous civic answer to the violence into a slogan that the government and Spain’s political class have unanimously embraced.

Barcelona mayor Ada Colau said people must “overflow” the streets of the city in the march aimed at showing a “brave” and “diverse” response to terror attacks.

A tweet sent by Barcelona city hall declared “we are an open, welcoming city of peace. Today we take to the streets again with the cry ‘I’m not afraid’.”