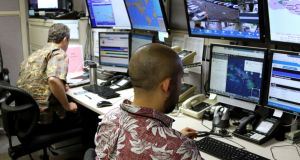 The Hawaii emergency management services worker who sent a false alert warning of an incoming ballistic missile this month had a long history of poor performance and sent the warning because he thought the state faced an actual threat, officials said Tuesday.

The mistake, which touched off panic and confusion across Hawaii on January 13th, occurred when the worker misinterpreted testing instructions from a supervisor, according to the Federal Communications Commission and state officials in Hawaii.

Believing the instructions were for a real emergency, the worker, who has not been identified, sent the live alert to the cellphones of all Hawaii residents and visitors to the state.

State officials had previously described the episode as an accident.

Shortly after it happened, governor David Ige blamed the false warning on a state employee who had “pressed the wrong button.” The FCC and Hawaiian officials have both been investigating the event.

The commission investigation, which is continuing, revealed a series of missteps that led to the false alert, including major gaps in Hawaii’s protocol for handling public safety alerts.

The state report was more critical of the employee, who it said had been fired.

The investigation found that he had been a “source of concern” for 10 years and had twice before confused drills with real-world events.

The mistake in Hawaii has stoked calls by lawmakers and regulators to improve wireless emergency alerts, which are slowly being updated and will include longer messages and Spanish-language versions starting next year. The false alarm also exposed some vulnerabilities in the military’s Pacific Command headquarters in Hawaii. On the morning of the alert, the command’s operations centre did not have immediate access to the state’s unclassified alert system. Mobile devices are not allowed in the command headquarters for security reasons.

The report recommends, among many suggestions, that Hawaii put into effect a two-person confirmation process, in which all directives and actions are read aloud and verified by two employees. On Tuesday, the FCC voted to improve one aspect of the emergency alert system, allowing public safety officials to send more geographically precise alerts to avoid spreading panic across broad swaths of the public. - New York Times