Africa can feed itself with a productive agricultural infrastructure 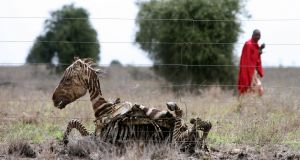 A Maasai man passes near a zebra carcass near Isinya in Kenya. Photograph: Radu Sigheti/Reuters

Two-thirds of the uncultivated arable land in the world is to be found in Africa. Yet the continent is a net food-importer to the tune of €35 billion a year, with a third of all calories consumed in Africa imported.

It is a cost the impoverished continent can ill-afford. A resource-rich continent afflicted and held back by economic underdevelopment as much as adverse weather and drought, although exacerbated by climate change.

“It is time for Africa to feed itself,” president of the African Development Bank (ADB) Akinwumi Adesina insists.

The EU is attempting to help through a new task force chaired by Irishman Tom Arnold, an expert in development food issues who served in the Department of Agriculture, as chief executive of Concern, and adviser on food issues to the UN. He is a former member of the Irish Times Trust.

The 11-strong “Task Force Rural Africa”, a collaboration between the EU experts and the African Union’s own, is charged with producing a series of practical recommendations for action by the end of the year that will range from such issues as farm productivity, markets and investment, alternative work, research and training, poverty and climate change to rural depopulation. EU officials are confident significant money will be found for such projects in the next EU budget.

The task force is part of a broader EU response to the migration crisis and the need to strengthen the ability of African states to provide futures at home for their own people. It is also driven by a strong commitment by Ireland’s agriculture commissioner Phil Hogan who has developed a close relationship with his African Union counterpart, Josefa Correia Sacko.

Africa’s population is expected to double by 2050, from 1.2 billion people to 2.4 billion, predominantly young. The International Monetary Fund estimates that it needs to increase sixfold to 18 million the new jobs yearly up to 2035, to absorb new labour market entrants. Deteriorating food security will mean a projected increase in the undernourished by one-quarter to 320 million by 2025. Agriculture will be key, Hogan says, insisting the group’s work is not about importing European solutions, or, as in the past seeing Africa as an untapped market, but assisting Africa to find its own solutions. “Nowhere is this potential stronger,” he argues, “than in the agriculture and agri-food sector, which employs up to 75 per cent of the African labour force while representing less than 33 per cent of African GDP”.

East Asia, the ADB argues, was able to lift 400 million people out of poverty in 10 years by investing heavily in agriculture. Brazil went from a negligible agricultural producer to the world’s second-largest producer of soy and beef, and largest producer of coffee beans, sugarcane and oranges in the span of two decades, by investing in research and development to boost food production.

Productivity is crucial. Since 1990, cereal yields have increased by 164 per cent in Brazil and 81 per cent in Uruguay, while average African cereal yields grew by less than 40 per cent. Africa’s yields are only just over half the international average.

Agribusiness added-value accounts for 78 per cent of total value added in all agricultural value chains globally, yet only half as much in Africa – it exports 69 per cent of the world’s raw cocoa beans, but only 16 per cent of ground cocoa, typically worth two to three times more per ton.

African farmers are also increasingly susceptible to climate change-induced fluctuations in rainfall and temperature, with major African staple crops expected to have 8-22 per cent lower yields by 2050.

And the task force’s crowded agenda may also look at the challenges of land tenure and good governance across the continent. Only 10 per cent of Africa’s rural land is registered, while inefficient land administration means that transferring land title deeds costs twice the price and takes twice as long as it does in developed countries.